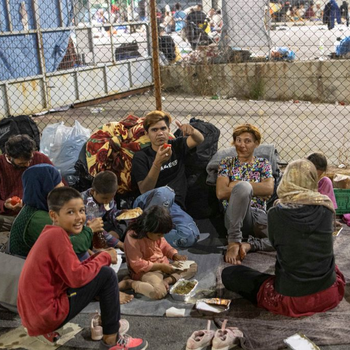 Last week's tragic news of the destructive fire in the refugee camp in Moria left no one without grief. With the fire destroying a majority of the camp, thousands of asylum seekers are now left without shelter, helpless in an already vulnerable position. Renew Europe expresses its full solidarity with all the people whose lives have been impacted by the fire.

Renew Europe's members in the Committee of Civil Liberties raised the alarm about the unsustainable situation in the overcrowded camp, with a population four times bigger than the camp's actual capacity, creating unsafe living conditions, especially in the middle on the ongoing pandemic.

Today the European Parliament held a debate on the need of an EU response to the situation in the refugee camp. Renew Europe emphasises that the EU must quickly organise to provide help on the island. There is an immediate need for a response. However, we must realise that the problem is of more significant magnitude. The tragic fire shines light on the very urgent need for a deep reform and a well-functioning migration and asylum system.

Renew Europe has for long been pushing for a swift and full reform of the CEAS ("Common European Asylum System") in line with the principles of solidarity and responsibility. We cannot waste more time. Renew Europe welcomes that the Commission next week finally will present the New pact on Migration and Asylum, that should be based on solidarity and a fair sharing of responsibilities between member states. With the pact released, we urge that the German Presidency rapidly start the negotiations in the Council to adopt a mandate as soon as possible. Along with a reform of the CEAS, Renew Europe also pushes for a proper implementation at the national level to respond to the migration challenges in full respect of the fundamental European values. A humanitarian catastrophe like the one in Moria must never happen again.

"Moria makes painfully clear that the EU is failing asylum seekers. We cannot leave people without shelter and care, it is contrary to all European values and laws. However, it is no accident, it is the direct consequence of our policy of deterrence. As the Commission presents the new Pact for Asylum and Migration next week, one thing is clear for me: it cannot be continuation of this policy, it cannot be the blue print for more "Moria's" at Europe's borders. Let Moria be a wake up call to change course."

"”Our current migration policy is not fit for purpose. The recent fires in Moria are another cynic reminder of this. As long as migrants find their way to the EU via irregular routes, we need a proper response. We need to take shared responsibility and create a future-proof migration policy. We owe it to the migrants and our citizens to regain control on migration.”

MEP Fabienne Keller (Agir, France), member of the Parliament's Civil Liberties Committee and rapporteur of the revision of the Dublin regulation.

"This event in Moria is sad, yet not surprising. In a camp of an initial capacity of 3000 places, over 12 700 persons are waiting for their asylum procedure to progress and have been so for months or even years. The failure of the Common European Asylum System is crystal-clear. Times for divisions and immobility have passed. We need a sustainable and fit-for-purpose asylum policy built on solidarity between the Member States and dignity towards those applying for international protection in Europe."

Link to the Renew Europe vision for Asylum and Migration.

LIBE The future of Europe