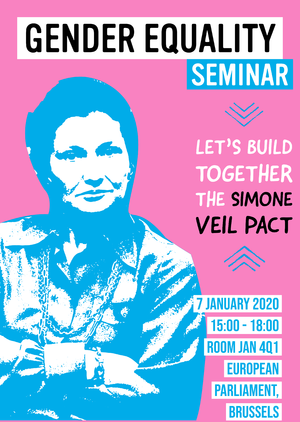 As an activist and women’s rights campaigner, ground breaking politician and committed European, Simone Veil’s work encapsulates the very best of our European Union – respect for human dignity and human rights, freedom, democracy and equality. Renew Europe hopes to honour this legacy by building together the ‘Simone Veil-Pact’ – a political commitment by Member States to adopt the most progressive national measures currently in force in the field of women’s rights and gender equality in the EU. The New Year’s Seminar 2020 will bring together Members of the European Parliament, Commission, Council and women’s rights activists to build momentum for the Pact to deliver on gender equality in Europe.

Keynote speech on behalf of the European Commission

Keynote speech on behalf of the European Council Presidency

Virginija Langbakk, Director of the European Institute for Gender Equality

Concluding remarks and the way forward

by Sophie In ’t Veld, MEP