Barcelona 25 years later : is there still hope for the Mediterranean ? 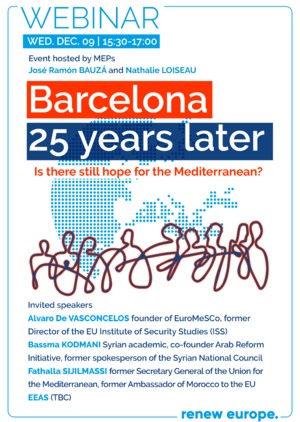 Renew Europe cannot stand by and let Russia, Turkey and the US shape the EU’s own southern neighbourhood in the coming years. There is a pressing need to discuss the past 25 years of the Barcelona Process to overcome the current crisis and elaborate a new vision, for which we must first learn our lessons.

Council and Commission will mark the date and a renewed EU Southern Neighbourhood Policy will be proposed by the Commission early 2021. We are at crossroads: democratic transitions and setbacks, revolutions and conflicts, migratory crisis and economic collapse of Syria/Lebanon on top of a highly unstable political situation in Libya and Algeria.

If you wish to access interpretation of this event, please join via the following Zoom link https://us02web.zoom.us/j/84709213784

• Delphine Borione, diplomat, former Deputy Secretary General of the Union for the Mediterranean, former Ambassador of France to the UN in Rome