Steps must be taken to create a European FBI 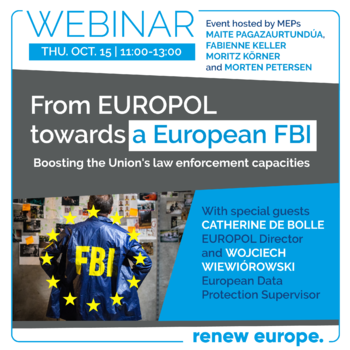 Renew Europe MEPs hosted a webinar today to discuss EUROPOL and how to boost the EU's law enforcement capacities with stakeholders and high-level experts. Panellists from EUROPOL, the European Data Protection Supervisor, the European Commission and national experts addressed how new and evolving threats creates an urge for a more powerful EUROPOL as well as how to actually strengthen EUROPOL's mandate to fight serious organised crime and terrorism across borders. Watch the webinar here.

The Renew LIBE team is working on a position paper with a set of policy suggestions on the future EUROPOL agency, and the thoughts reflected in today's webinar will be taken into account. The Renew Europe Group is expecting to adopt the position paper in November.

For many years, our group has requested a proposal to reinforce EUROPOL's powers and increase its resources and we welcome the European Commission's intention to later this year put forward a legislative proposal for a regulation to strengthen its mandate.

Maite Pagazaurtundúa MEP, Vice-Chair of the Committee on Civil Liberties and co-organiser of the webinar, summed up today's discussions:

"EUROPOL is not just another European agency. EUROPOL has an added value in ensuring the internal security of the Member States as well as the security of their citizens. We must be aware of the value of what our police forces and EUROPOL are achieving and moving forward.

EUROPOL needs information and national authorities and private entities must cooperate in a swift and respectful manner to provide it; it also needs to have sufficient resources for the EU to excel in innovation in internal security as it does in defence. This end the strengthening of the EUROPOL Innovation Laboratory and the creation of synergies with the private sector is essential; it is also essential that EUROPOL and its relations with other international actors (Interpol, Ameripol, Afripol, Aseanpol ...) are used to strengthen European geostrategic capabilities."

Fabienne Keller MEP, Member of the Committee on Civil Liberties and co-organiser of the webinar, commented:

"Security is a key prerequisite to our democratic societies. All citizens should feel safe and protected in the Union and Europe must deliver more on security. Therefore, we call for a European FBI, not as an EU federal police entity, but as an operational tool for stronger and more efficient cooperation between national police and judicial forces. Addressing current coordination gaps will step up our capacity to stop cross-border criminals and fight terrorism."

Moritz Körner MEP, Member of the Committee on Civil Liberties and co-organiser of the webinar, said:

"Criminals do not stop at borders. Police should neither. We need real European law enforcement, which can act on its own initiative. Europol should have a right to initiate investigations and to pro-actively execute law enforcement activities in the Member States."

Morten Petersen MEP, Substitute of the Committee on Civil Liberties and co-organiser of the webinar, also said:

"Sharing of information between member states should be mandatory in order to avoid having member states holding on to information that other member states could have used in their investigations. As it is now, member states only share information on a voluntary basis, which is definitely not sufficient. The transnational character of both the Paris in 2015 and the Brussel attack in 2016 underlines the need for more information exchange. We see too many examples of just the opposite. The terrorists from the Paris attack in November 2015 were initial stopped at the Belgian border but because the French authority did not have access to photo identification they were released. We need to become better at sharing information in the future. That is the premise for avoiding these awful and tragic events."