Dacian Cioloş: Europe must not be ‘held hostage’ by those who behave like despots 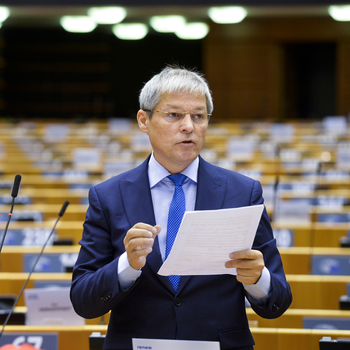 Dacian Cioloş, leader of Renew Europe put the blame for the blockage in the European budget squarely at the door of two EU leaders who are behaving like “despots” in a debate today in the European Parliament to prepare the December EU Council meeting.

‘Europe is being held hostage. The two people responsible for this come from a region that has been hard hit by communism and that spent decades behind an Iron Curtain, and it also where I come from. A region where the pandemic is hitting many families, where hospitals, entrepreneurs, researchers, farmers, communities and youth most urgently need European investment.’

‘A region where we still remember all too well what the word oppression means, just like freedom and democracy. In the face of this history, to accuse Europe of being "Soviet" is ridiculous. Even more so when one behaves like a despot and is then the first in line for boxes of Putin's vaccine.’

‘Europe has been taken hostage. But there is no fatality, no East-West fracture. There are Europeans from East to West, from North to South, determined to live their lives governed by a rule of law that respects their freedoms. We are used to protecting the European budget against fraud, now we must protect it against corruption in a neutral and impartial way.’

Recalling that a majority of Hungarian people believe EU funds should be linked to the Rule of Law, Dacian Cioloş said:

‘Surveys are clear, some authoritarian politicians no longer listen to their citizens. They would have us believe that the abuse come from Brussels! The European Union is not authoritarianism, but the difficulty in making clear decisions but this pandemic shown us that this is possible.

‘Let us show that "Brussels", as they refer to us, knows how to take strong decisions to defend our freedom and democracy.’

Addressing Brexit and the need for negotiations to conclude, so the European Parliament can scrutinise any deal, Mr Cioloş said:

‘Let us continue to protect our interests and values also in our negotiations with Great Britain. We must insist on what is essential for us, but we must also give Parliament enough time to look at the agreement before deciding on it.‘

‘We must build on our international partnerships. Let us use all the strength of European influence to prepare COP26 in Glasgow starting from today, working with the US for a common agreement, to fight climate change on a global scale.

This Parliament and Renew Europe have already sent a strong message! We support the European Green Pact and the reduction of greenhouse gas emissions by at least 55% by 2030. The Council will have to show similar determination and unity on climate change.

Only by setting ambitious targets will we succeed in transforming our industries through green and digital technologies and restarting the European economy for the world of tomorrow.’