Dacian CIOLOȘ: "We are going to rebuild, but also transform around truly European priorities" 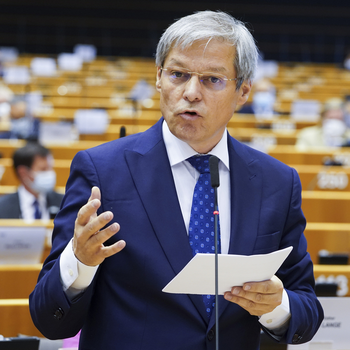 2020 has been the year that exposed our weaknesses as a Union but also gave us the prospect of deeper cooperation. This was the message from Dacian Ciolos, President of Renew Europe today, during the plenary session of the European Parliament. Speaking in front of Commission President Ursula von der Leyen, Dacian Ciolos reminded her that we are stronger as a Union when we work together and that we expect the Commission to fully implement the decision on the rule of law taken by the co-legislators.

“2020 put everything to the test - our health, social, political and economic systems. At the beginning of the year, the crisis exposed the weaknesses of the European project, particularly in terms of EU wide coordination. Who can forget the chaotic border closures during the first wave. But Europe has shown its capacity to rebound and has given us the prospect of the deepening of our European project. The coordination work for the research and purchase of vaccines is one example, the recovery plan which boosts the multiannual budget is another. We are not just taking steps to rebuild our economies but also taking structural decision to transform our Union - I am speaking in particular of the new own resources and conditionality to the rule of law. “

He continued: “The measures to tackle this crisis were born here, in this hemicycle, and were able to see the light of day, because we were able to build a solid majority to carry them through to the end. But, before adopting these measures, I want to tell you, Madam President, that both myself and my group listened carefully your words. I welcome your clear statement that the law prevails over political declarations. “

Dacian Cioloş concluded on a lesson to be learned from this year in terms of how the EU operates: “This crisis has exposed structural problems caused by the question of unanimity in the Council. We must make Europe more responsive. Its decisions must be faster, clearer. This is why, since the beginning of this mandate, Renew Europe has been pushing for the launch of the Conference on the future of Europe. Let us not be afraid to debate this and find the right solutions because Europe is at its most effective when it is united, determined, and puts its citizens at the heart of its decisions and ambitions. “