After the elections. The future of EU-US relations 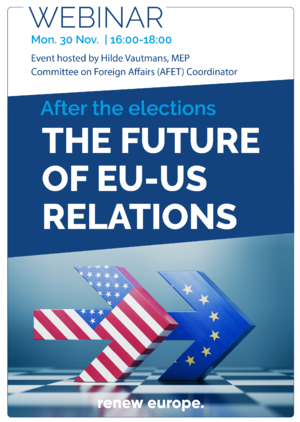 The transatlantic partnership is old, deep and central to a law-based world order, but, in an international climate marked by growing great power competition, both partners must adapt to a new era.

The recently concluded US presidential elections represent an excellent opportunity to look ahead and seek ways to bridge the gap that has developed over the last years between the two sides of the Atlantic.

It is now more important than ever that Renew Europe focuses debates on this critical relationship for Europe.

The event aims to discuss the future of EU-US relations and ways to address the common challenges faced by the two transatlantic partners.