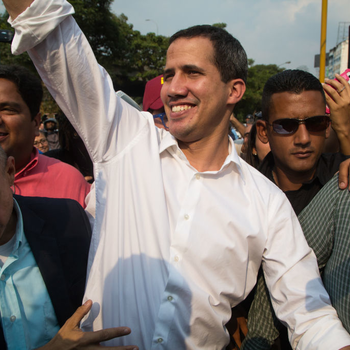 Following the failed attempt by several government officials to illegitimately seize control of the Venezuelan National Assembly, the European Parliament today reacted by adopting with a large majority a resolution, initiated by our political group, to recognise and support Juan Guaidó as the legitimate President of the National Assembly and interim President of the country.

Renew Europe Group strongly condemns the attempt of a parliamentary coup, earlier this month, by the Maduro regime and his allies who tried to hold an illegitimate vote without a quorum while security forces loyal to Venezuelan President Nicolas Maduro physically prevented the majority of National Assembly delegates, including Guaidó and opposition delegates, from entering the building for the vote.

“This resolution is beyond a mere parliamentary debate or a declaration of intentions of the European Parliament because it denounces the tyrannical regime of Nicolás Maduro at a key moment for the country. We demand to extend and intensify the sanctions to those responsible for the violation of Human Rights and the repression in Venezuela and we ask the Member States that have not yet recognised Juan Guaidó as the legitimate interim president, to do so. The European Parliament has shown once again its strong support for democracy and human rights in Venezuela and will continue to stand by the Venezuelan people.”

“Maduro and his regime have made clear time and again that they have no intention of giving up power. The recent parliamentary coup and attacks on the National Assembly, the only remaining democratic institution in the country, prove that Maduro will stop at nothing.

The EU must respond firmly with targeted sanctions, but with ones which are effective. We need to extend these to include family members of those sanctioned. The EU should also continue to explore all peaceful options to put the pressure needed on the regime to finally engage in meaningful dialogue with the opposition.”