Dacian Cioloș: “In Europe, the temptation to build walls continues to threaten us” 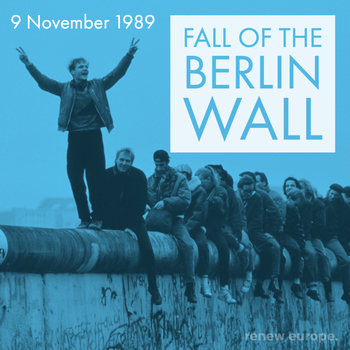 At a ceremony in the European Parliament today to commemorate the fall of the Berlin Wall 30 years ago, the President of Renew Europe, Dacian Cioloș MEP, today offered his personal reflections on the end of communism and warned about the erection of new walls in Europe, in whatever form they may take.

Speaking in the Plenary of the European Parliament today, Dacian Cioloș said:

“In November 1989 I was 20 years old. I was in my first year of university, living in one of the toughest communist regimes in Central and Eastern Europe - Ceausescu's. I only heard about the fall of the Berlin Wall a few days later on Free Europe, the radio that allowed us to connect "illegally" with the rest of the world in those times.”

“On November 9, 1989, a wall separating Europe into two was destroyed and with it began, at least in Europe, the end of a regime that survived solely on limiting the freedoms and rights of citizens by the state. Like other young people of my age, like other Romanians, like other Central Europeans, I was thirsty for freedom, democracy, Europe. “

“In Europe, the temptation to build walls continues to threaten us. Brexit means new barriers to trade and freedom of movement. I hope for this reason that British citizens, who have always fought for a free Europe, have to think twice before building new borders.”

“The reaction of some when it comes to Europe's migration challenges is to call on new walls. Walls don't have a place on this continent. We do not want to build a fortress type of Europe. We would rather need to build bridges and partnerships with countries in Europe’s neighbourhood.”

“Walls are not only physical, they are also barriers imposed by fear, in the path of political freedom and prosperity. Political parties and leaders with authoritarian tendencies in Europe, who want their country or Europe to return to the dictatorship and corruption of the past must be stopped.”

“European democracy and freedom must be protected from those who, like Viktor Orban in Hungary, have no hesitation in reaping the benefits of EU membership, but rejecting its values. 30 years after the fall of the Berlin Wall, we have the responsibility to defend the ideals and values in the name of which this wall was destroyed: freedom, democracy, prosperity and European unity.”

“In the coming months, we will have to launch a European-level conference on our common future, involving the citizens of the European Union to lay the foundations of a European project that will inspire confidence for years to come.”