Syria: the fight against impunity 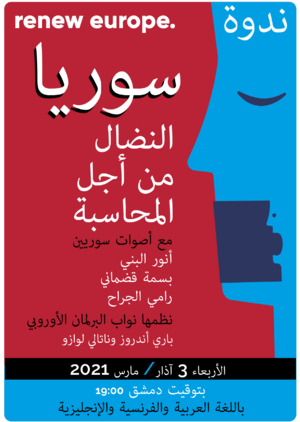 Europe cannot stand by and let Russia, Iran and Turkey shape the future of Syria, nor condone a regime that has murdered more journalists and protesters than any other in the past decade, fostering more violence, poverty and migration. For Renew Europe, our political group at the European Parliament, fighting impunity in Syria must remain an essential EU priority.

Exactly ten years after the start of the uprising and the subsequent repression and conflict, over half of Syria's population has been displaced or has fled, including one million to the EU. Most refuse to return to Syria without protection, justice and accountability. Many hope EU countries will speak on their behalf in advance of the Brussels 5 Conference on the future of Syria, due to take place on March 29.

How can the EU reassert itself in the eyes of Syrians and use its power to uphold international justice and accountability for crimes against humanity?

Elected Members of the European Parliament, Barry Andrews MEP, member of the Development Committee, and Nathalie Loiseau, Chair of the Security and Defence Committee, will host a public webinar with Syrian voices:

The debate will last 1h30 minutes

Languages: interpretation in English, Arabic and French on those links: