The Science and ethics of gene drive technology: from a conservation and development perspective 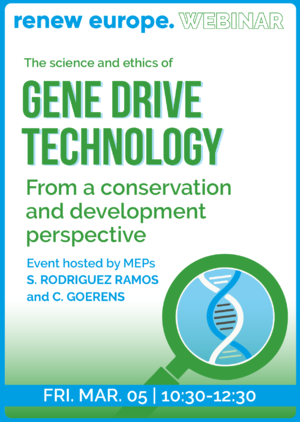 This hearing intends to examine gene-drive technology and its possible impacts, including unintended ones and reveal the complexity of an unknown technology with inherent uncertainties. Scientists from different backgrounds in the field of gene-drive research will present most recent scientific findings and allow us to exchange on a technical, but also ethical debate.

We believe that both Committees (ENVI/DEVE) have an important say in this debate, reason why experts from both sides will be invited to elaborate on specific ethical, scientific and implementation issues.

Some might know gene drives for their possible capacity to suppress malaria by eradicating mosquito populations. However, their application goes well beyond, including through its potential to eliminate other insect-transmitted diseases, erase herbicide and pesticide resistance in weeds and pests and remove invasive species from ecosystems. Whilst looking into potential benefits, we should also weigh the significant risks involved in gene drive use. Gene drives may have unintended risks such as, limited access to the seed varieties, patented ownership of the food supply, impact on rights of indigenous people and unintended mutations.