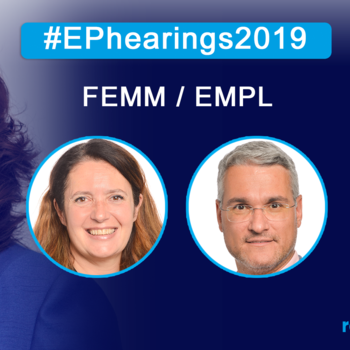 The joint hearing of Commissioner-designate Helena Dalli by the parliamentary committees for Women’s Rights and Gender Equality (FEMM) and Employment and Social Affairs (EMPL) was judged positively by Renew Europe.

Following the various questions asked by Coordinator Irène Tolleret (FEMM) and Members Radka Maxova, Soraya Rodríguez and Monica Semedo, Renew Europe considers Mrs Dalli’s commitments to be in line with the group’s political expectations. Dalli committed to work with the European Council on unblocking the EU's accession to the Istanbul Convention and the Anti-Discrimination Directive and pushing horizontal mainstreaming of equality for all, including women, persons with disabilities and LGBTI rights.

After the hearing, Irène Tolleret, Coordinator of the FEMM Committee said:

“We have given our approval to Commissioner Designate Dalli because she ensured her commitment towards the main Renew Europe priorities, as the draft of a new gender equality strategy, the fight against violence on women through the EU's accession to the Istanbul Convention, the access to sexual and reproductive rights for every European woman and the fight against all forms of discrimination. Renew Europe considers Commissioner-designate Dalli as a good candidate to strengthen our efforts to promote women's rights and gender equality. We do not have any doubt that with the confirmation of Mrs. Dalli as Commissioner, the implementation of the Simone Veil Pact could become reality.”

“Commissioner-designate Helena Dalli made some promising comments on her efforts on equality, freedoms and the rights of women, children, and other minorities and will receive our support. We at Renew Europe would like to see more efforts put in the area of social inclusion and access to the labour market for women, including those suffering with chronic illnesses and cancer and ending gender-based violence, as well as more concrete ideas on actions to support access of people with disabilities and to promote diversity-related education. We welcome her commitment to have her first official visit to a Roma settlement, but we would have liked to hear more on her plans for the social inclusion of the Roma community, the largest ethnic minority in the European Union. In any case, on our side we will be sure to actively promote new solutions on these old problems.”

"Being strong on equality and non-discrimination is central to making sure all Europeans have equal opportunities. Dalli showed today that she is strong on this and that she will work with Parliament on important issues like advancing LGBTI rights across Europe. For Renew Europe, this all belongs to fighting for our European values of democracy, rule of law and fundamental rights, something all Member State governments should adhere to."