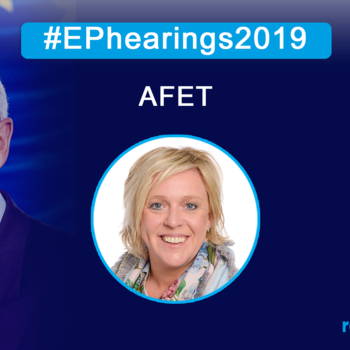 After being heard yesterday by MEPs in the Foreign Affairs Committee, Renew Europe decided to back Josep Borrell, Spanish candidate for High Representative/Vice-President for foreign affairs and security policy. The decision, taken today by political group’s coordinators, is mainly based on Josep Borrell’s intention to make Europe a more global actor in the world and his statement that the EU should learn to speak the language of power.

“I fully subscribe to President-elect Ursula von der Leyen’s idea that we need a stronger and more united Europe, but this is something we have been struggling with for years. It is true that, in the past years, new initiatives have been proposed that could help the EU become assertive. We can think of the European Peace Facility or the European Defence Fund. However, member states still put their own interests first when it comes to foreign policy and a united approach is still lacking. On security and defence, Josep Borrell wants the EU to be more operational and he insisted we need to work together in order to be more efficient. Mr. Borrell committed to strive for a qualified majority voting in some foreign policy decisions, in line with the existing provisions in the Treaty and to take the views and recommendations of the Parliament into account.”

“The world is continuously changing, the EU’s neighbourhood has very active dynamics and we must be ready to act and defend our citizens and our interests. The EU must stay firm on its position towards Russia and ask the Kremlin to respect international law, but it also should implement a new strategy for EU-Russia relations and try to open dialogue in other areas, where possible. We definitely need to show political commitment if we want to reach our goals. It’s time to renew Europe by adapting our strategies to these new challenges and by sending out a message of unity."

“I believe ‘the proof of the pudding is in the eating’ and we, as Parliament, will always be there to make sure Mr. Borrell honours his commitments and engagements.”

During the hearing, Josep Borrell said he wants to push for reforms in the Western Balkans, focus on achieving progress in the dialogue between Serbia and Kosovo by choosing Pristina as his first official visit if confirmed HR/VP, support democracy and the territorial integrity of Ukraine, come up with a new strategy towards Africa, boost political relations with Asia, improve cooperation with Latin America and reinstate EU-US relations.