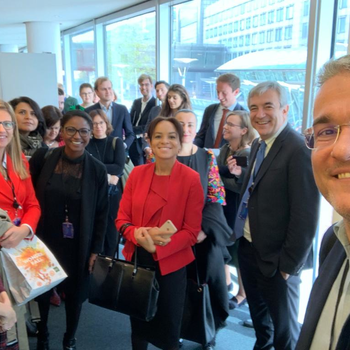 Renew Europe MEPs from the European Parliament's Economic Affairs Committee (ECON) and the Employment and Social Affairs Committee (EMPLY) today cross - examined Valdis Dombrovskis, for the post of Vice President of the European Commission for “an Economy that Works for People”. Renew Europe MEPs provided a positive assessment of Mr Dombrovskis’s answers, in particular on access to finance for SMEs, the fight against money laundering and financial crime, inclusion in the labour market and his remarks on the need to make social inclusion a priority in the European semester. Renew Europe looks forward to working closely with Mr Dombrovskis to deliver a radical agenda for reform.

“The completion of the Banking Union is needed to counter the risks of another, much feared “doom loop”, whereby domestic banks, who are also the largest buyers of their country’s debt, risk liquidation. Mr Dombrovskis reassured us that he is aware of the structural challenges in the Eurozone; we have much work to do with him to deliver the reform Europe needs.

“It is about time that the European Pillar of Social Rights is implemented. In 2017, EU Member States made a commitment on this, but often legislation hits a deadlock in the European Council. We are pleased Mr Dombrovskis committed to furthering this today and we are looking forward to seeing a concrete Action Plan shortly.”

“We at Renew believe that a strong economy goes hand in hand with equal opportunities for everyone. If people cannot participate, they cannot contribute to our shared prosperity. We were pleased that Mr Dombrovskis acknowledges his mandate for an economy that works for people and we expect him to deliver on such commitments. “

"We will continue to fight for a European Union where all citizens, regardless of their background and circumstance, have access to the labour market, free from discrimination."