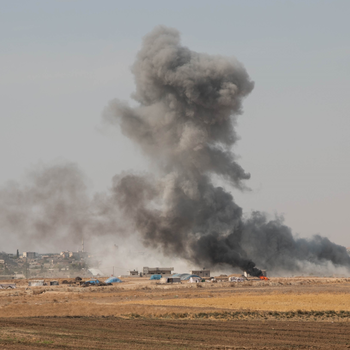 The Renew Europe Group in the European Parliament has this evening called on HR/VP Federica Mogherini to convey the EU-declaration of Wednesday 9 October 2019 to Turkish authorities and to lay the foundation for a strong and comprehensive EU response to the crisis in northeast Syria. In a letter sent to HR/VP Mogherini by Renew Europe Group First Vice-President, Malik Azmani, and co-signed by more than 225 MEPs across the political spectrum, Mogherini is asked to initiate a dialogue with Turkish authorities aimed towards finding a sustainable solution to this crisis.

MEP Malik Azmani (VVD, The Netherlands), said a further escalation of the situation is undesirable and all efforts have to be aimed at ceasing military hostilities and de-escalating the situation:

“The situation in northeast Syria demands our immediate attention. The violence in the region has resulted in hundreds of casualties and already over 130.000 people have been forced to flee their homes. Reports that the control of Kurdish detention centres holding ISIS fighters is compromised, are of extreme concern as this could pose a serious security risk for Europe. An ISIS resurgence is a scenario we must avoid at all cost.”

“Following the decision by the US to pull its troops out of the area last week, I have already sent the European Commission urgent questions regarding this security risk. Now that the fears of Turkish military action and the consequences of that operation are becoming reality, it is absolutely vital that the EU takes action without any delay.”

“For this reason I have asked my colleagues across the European Parliament to co-sign a letter to HR/VP Mogherini, calling for a strong EU response to this crisis and indicating the need to take decisive action with the aim to end all violence in the region.”

“With over 225 Members signing the letter, this is a strong signal from the European Parliament calling on the EU to start an immediate dialogue with the Turkish authorities to de-escalate the situation. We call upon the Foreign Affairs Council to seriously consider EU-wide sanctions such as a ban on EU export of weapons to Turkey or the freezing of certain EU-funds.”

"Europe is too soft. Our attitude is all about wait and see. We speak or denounce and when united we condemn – at best - but we never really act. For that reason, we let other powers dictate the next steps in a conflict that often impacts us too. It's about time Member States realise that only a united Europe backed with sufficient hard power will be relevant in today's world. Not in tomorrow's world, in today's world."

Last Tuesday, Turkish armed forces started a military operation into SDF controlled areas in northeast Syria. This has already resulted in numerous casualties and hundreds of thousands of citizens fleeing their homes, adding extra pressure to the already fragile situation in the area.

The letter warns on the current development, which is diverting and nullifying the efforts shown by the Global Coalition to defeat ISIS, in which SDF forces currently still play a vital role in providing security against still active ISIS components. Furthermore, the detainment of ISIS-fighters in Kurdish controlled camps is now at risk with numerous SDF forces being called to the border. This will increase the risk of a resurgence of ISIS, which must be prevented at all times and is a key priority to the security of the region and the EU.