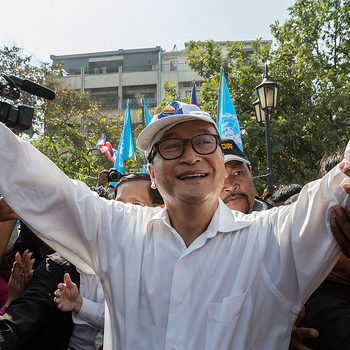 Renew Europe Group in the European Parliament calls on the Cambodian authorities to allow Sam Rainsy and his colleagues from the Cambodian National Rescue Party (CNRP) a free and peaceful entry in the country on the 9th of November, when the nation celebrates the Independence Day.

Cambodia’s prime minister Hun Sen has ordered troops at the border with neighbouring countries to be on high alert and led a crackdown on supporters of former main opposition party, as their leader vows to return from self-imposed exile and promised to arrest Sam Rainsy, if he enters the country.

Renew Europe MEPs Ilhan Kyuchyuk, Petras Auštrevičius, Abir Al-Sahlani, Phil Bennion and Javier Nart have initiated a common statement addressed to H.E. Nom Piseth, Ambassador of the Kingdom of Cambodia to Austria, Belgium (Residence), The Netherlands, EU and Luxembourg, expressing their concerns regarding the instability that may be caused by such violent actions. The letter has been co-signed by 56 MEPs from the main political groups in the House.

“We are closely monitoring the situation and we urge the Cambodian authorities to ensure peace and to desist from incitement of the military and police to perpetrate or to permit such violence.

We express our expectation that PM Hun Sen and the government apparatus will act in conformity with Cambodia’s constitution and accepted international civilised norms and allow Sam Rainsy to meet with supporters of the now-banned CNRP unhindered and without harassment from the authorities or their agents.

We reiterate our call on the Cambodian authorities to release opposition leader Kem Sokha and all political prisoners, and cease its intimidation of those domestic and international journalists who are not full regime supporters.”

Since Rainsy’s announcement about his return to Cambodia, CNRP supporters have been targeted by authorities in the country with increasing ruthlessness. At least 48 other CNRP activists have been arrested so far this year. Due to repeated human rights violations committed by the Cambodian authorities, in February 2019, the European Union triggered a process that may lead to a temporary suspension of tariff- and quota-free access to the EU single market granted to Cambodia under the ‘Everything But Arms’ (EBA) scheme.