Nicaragua: Renew Europe Group calls on EU Member States to agree on the specific list of individuals and entities to be sanctioned 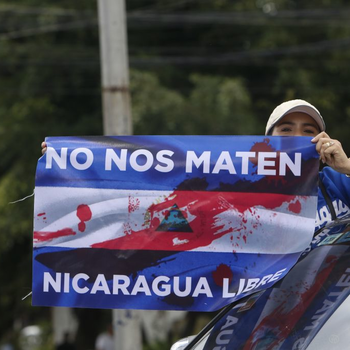 MEPs today adopted a resolution on the situation of human rights and democracy in Nicaragua, condemning all the repressive actions of the Nicaraguan Government, in particular the deaths caused, the generalised restriction of freedom of expression, assembly and demonstration.

The European Parliament urges the Nicaraguan Government to end the persistent repression of dissent and the ongoing pattern of arbitrary arrests, torture and sexual violence and calls for the immediate release of all those arbitrarily detained.

Renew Europe MEP Javier Nart (Spain, Independent), Vice President of the Delegation for relations with the countries of Central America (DCAM), said the European Commission must establish immediately the list of people to be sanctioned:

"In 1979 the people of Nicaragua fought and died for its freedom, democracy, and dignity against the Somoza dictatorship. I was there. 40 years later, it is tragic that Nicaragua has to fight again and die and this time against a new dictatorship: the Ortega - Murillo couple.

Today, paramilitary gangs armed by the regime cover with blood the streets. The reports of HRW, IA, OAS, UN, MESENI, on the human rights situation in Nicaragua are devastating.

Because in Nicaragua today there is neither democracy, justice nor human rights. That explains why the most important groups in this Parliament unanimously agreed on a joint resolution without amendment.

We reiterate our solidarity with the detained, tortured, disappeared and, beyond them, with the entire Nicaraguan people. The EU-Central America Association Agreement is based on the democratic behaviour of its members.

The resolution presented is based on two essential points: first, the European Commission must establish immediately the list of people to be sanctioned, starting with Daniel Ortega and Rosario Murillo. Second, the suspension procedure, regulated by Article 355 of the European Union / Central America Association Agreement, shall be applied to Nicaragua”