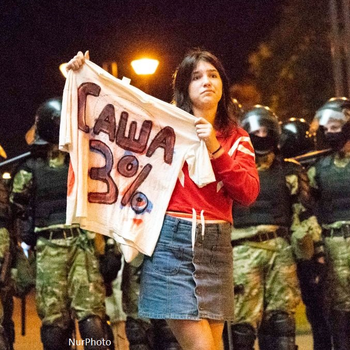 Renew Europe firmly condemns violence and political repression against the people of Belarus, perpetrated by Lukashenko and his accomplices, after bogus elections yesterday. Renew Europe stands in solidarity with protestors and calls for an end to violent acts against them. The European Union must not accept the scenes of harrowing repression in the streets of Minsk and other cities in the country against those who demand democracy and freedom.

In February 2016, the EU lifted most of its restrictive measures against Belarusian officials and legal entities as a gesture of goodwill, aimed at starting a policy of engagement - yesterday’s worrying developments may now mean this has to be reviewed. Swift sanctions should be considered against officials in the authoritarian regime and clear support sent to the peaceful protestors who fight for a free and better future.

"My full solidarity with the white bracelet protestors in Belarus standing up to defend their right to a democratic vote. With hundreds opposition activists, journalists & protestors arrested over the last months, there was no election in Belarus, just a sordid façade. Lukashenko’s regime calls the high turnout in the election a provocation from the opposition and launched a mass crackdown on protestors; this is unacceptable and it calls for a strong international reaction.
The European Union must take the lead by firmly condemning the current Belarus regime with concrete and tangible actions, supporting those who call for democratic change and freedom in the region and urgently reviewing our policies towards officials in the regime. More than ever the people of Belarus need strong support from the EU in freely expressing their views. "

"Systemic violations of fundamental freedoms and human rights, as well as excessive fraud of election procedures, make this election illegitimate. The current situation in Belarus requires a clear and strong response from the European Union. It is important to assess and accordingly review the European Union's relations with Belarus. The upcoming European Parliament’s recommendation on Belarus will provide a solid basis for it.

I encourage the European Commission to provide all necessary assistance to civil society organisations and activists in Belarus, including asylum for those in life threatening situations."

"The EU must stand up against the fraudulent and repressive actions of the Belarusian regime and support the people of Belarus in their fight for freedom and change."