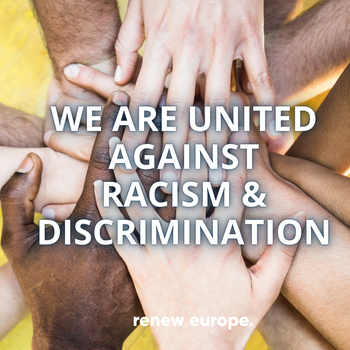 During the annual State of the European Union speech, the President of the Commission, Ursula von der Leyen today unveiled an action plan against racism. The Renew Europe Group in the European Parliament welcomes the Commission’s Action plan. In particular, the announcement that EU antidiscrimination laws will be strengthened. Renew Europe’s members have long called for the battle against racism in Europe to be stepped up, demanding a binding EU framework to fight against racism to be followed by the Member States and for the adoption of the 2008 antidiscrimination directive blocked by Member States. Also suggesting, among other things, a new inter-institutional task force, and measures to secure more diverse EU institutions. Fighting intolerance across Europe and continuing to promote non-discrimination on all grounds is one of Renew Europe’s key priorities.

"It is important that the European Commission will put forward new legislation that makes Member States also responsible for the implementation of the anti-racism action plan. The active involvement of Member States is essential for our common mission against racism and discrimination. Being close to all our citizens, the involvement of civil society is also crucial for successfully carrying out the anti-racism action plan."

"Today is a day of hope for all those who raised their voices during the protest marches in June. By presenting the EU action plan today, the Von der Leyen Commission shows how determined it is to fight structural racism and discrimination in Europe. I welcome that several of the recommendations of the European Parliament will be included in the plan. It is now time to prove that this action plan is not just another piece of paper but that it truly is a plan for our Member States and institutions to act against racism and discrimination in Europe"

LIBE The future of Europe Racism