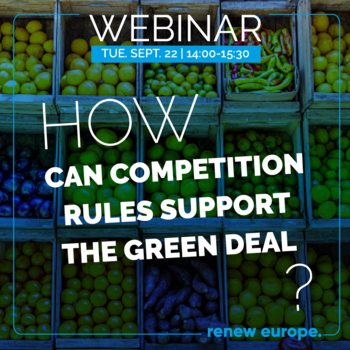 The Executive Vice-President of the European Commission and Commissioner for Competition, Margrethe Vestager, unveiled today a plan for a debate on the interplay between EU competition policy and the green deal. She made the announcement during a webinar hosted Renew Europe and titled “How can competition rules support the Green Deal?”. (Link to the recorded webinar)

Renew Europe welcomes the Commissioner’s announcement and considers it a bold move towards a greener EU competition policy.

Renew Europe first called for competition policy to play a major role in achieving a Green, Digital and Resilient Europe when the European Parliament adopted the Annual Report on Competition Policy, for which Stéphanie Yon-Courtin from the Renew Europe Group is rapporteur.

Stéphanie Yon-Courtin, Renew Europe Vice-Chair of the Committee on Economic and Monetary Affairs and rapporteur for the 2019 annual competition policy report, said:

“I welcome the announcements from Executive Vice-President Vestager. By launching this wide debate, the European Commission shows it has no taboo and that competition also has a role to play in achieving our EU objectives. I hope that at the end, more clarity and guidance will be provided to businesses, governments and stakeholders to support sustainable agreements. I also reiterate the need for the European Parliament to be associated to his wide debate and the upcoming review of the soft law. “

For the Chair of the Environment Committee Pascal CANFIN (Renaissance, France), wo also participated in the webinar:

« The Green Deal is an economic strategy and a systemic change. The EU has already proved in the past that we can use our competition law to uphold our values, such as a better control of globalisation through a better control of digital giant. We should now do the same with climate and environment.”