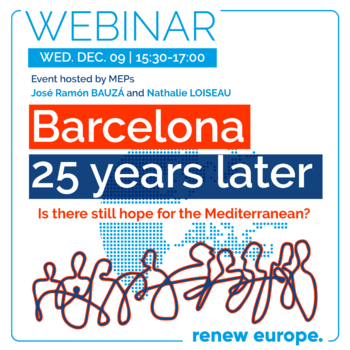 The Renew Europe Group would like to invite you to

Barcelona 25 years later: is there still hope for the Mediterranean?,

Renew Europe MEPs are hosting exceptional speakers to find answers to the current crisis in the Mediterranean, on the occasion of the 25 year anniversary of the Barcelona Process and on the eve of a new communication by the European Commission on the future of the European Neighbourhood Policy-South.

the founder of the largest network of Mediterranean think tanks Alvaro De Vasconcelos.

the Former Deputy Secretary General of the Union for the Mediterranean, Delphine Borione.

The event will be livestreamed on Livecast and Facebook.

More information about the event here and on the Renew Europe webpage (https://reneweuropegroup.eu/en/events/).

We hope that you'll be able to join us. Renewed EU-Africa partnership: we now have the basis to move forward on an equal footing, says Renew Europe

Over the past two days, EU and African Union leaders have met in Brussels. Postponed several times…
Read more