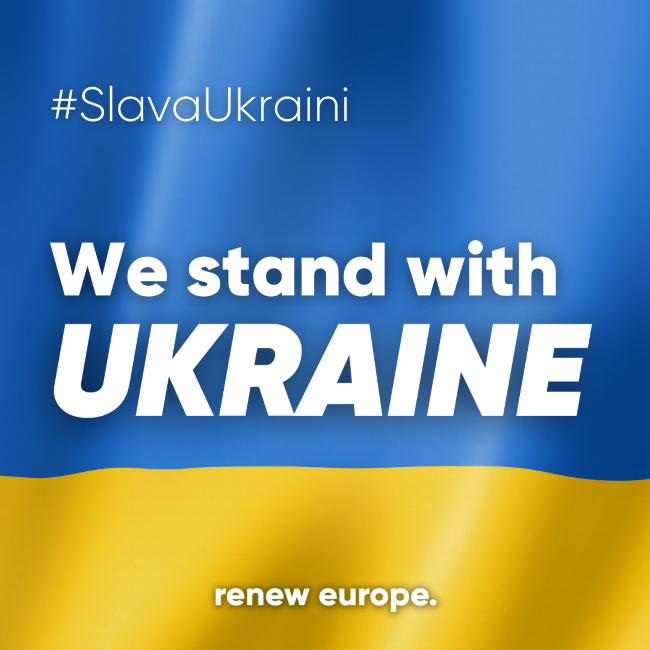 The Renew Europe Group in the European Parliament jointly negotiated a common declaration adopted by political group leaders, sending a strong and clear message to support Ukraine and to condemn the Russian military build-up inside and outside Ukraine’s borders.

The independence, sovereignty and territorial integrity of Ukraine within its internationally recognised borders must be guaranteed, likewise any country’s choice of alliances must not be subject to a third country’s approval.

Should Russia continue not to abide by its international commitments and obligations and launch an attack against Ukraine, the Council of the European Union must remain prepared to swiftly adopt severe economic and financial sanctions against the Russian Federation in close coordination with transatlantic and other like-minded partners. Those should include the exclusion of Russia from the SWIFT system, individual sanctions against individuals close to the Russian President and their families, entailing the freezing of financial and physical assets in the EU and travel bans. We also reiterate our call for the Nordstream 2 project to be immediately halted should Russia launch an attack against Ukraine.

Russian attempts at destabilising Ukraine, including the possible recognition of the so-called Donetsk and Luhansk entities must stop. Only the Ukrainian people can decide about the path their country should take to the future. Renew Europe has repeatedly showed its support for the people of Ukraine and their democratic rights, fundamental freedoms and human rights as well as the country’s choice for a European future of freedom, democracy, peace and security.

“By threatening Ukraine and blackmailing the West, Russia wants to dismantle the European security architecture and restore the senseless stagnation of the Cold War. The EU, united and in solidarity with Ukraine, respects the choice of the Ukrainian people to Europeanise. The future belongs to democratic pro-European reforms, which have already produced tangible results in Ukraine.”

“Ukraine must be assured of our long-term solidarity, support and unity because the crisis will be long. We must remain determined to lower the tension and pursue the path of diplomatic negotiation. But these negotiations must not undermine the principles on which our security is based: sovereignty, territorial integrity, freedom to choose our alliances. And our diplomatic credibility will be all the greater if we are firm in our determination to react forcefully if Russia attacks Ukraine.”