All war crimes committed in Ukraine must be prosecuted, including the crime of aggression 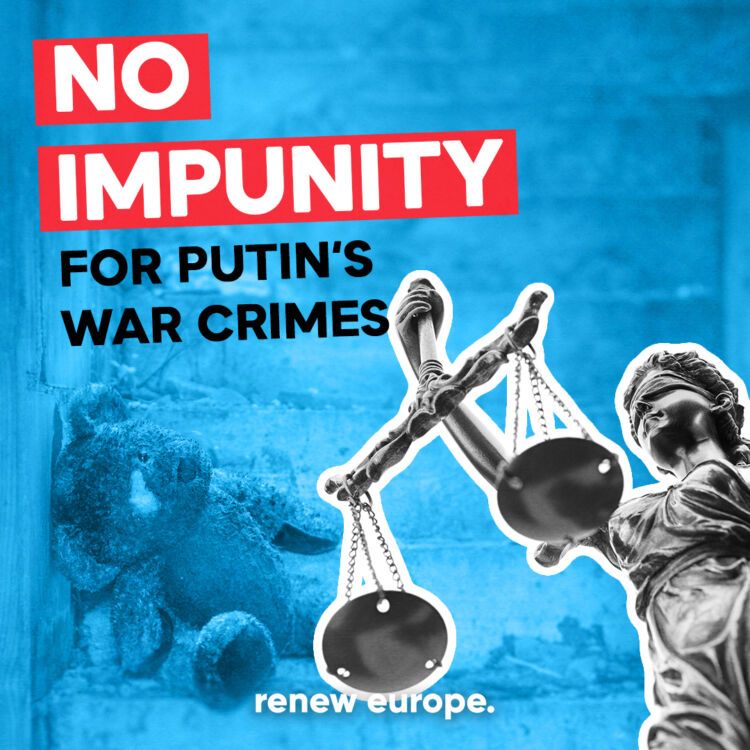 The Renew Europe Group in the European Parliament strongly condemns the Russian illegal, unprovoked and unjustified aggression in Ukraine and the grave cases of violations against human rights and the laws of war by Russian troops.

In a resolution on the fight against impunity of war crimes in Ukraine, today approved by the plenary in Brussels, our political group insisted on the importance of the collection of evidence in these cases. In order to ensure no impunity, a Special International Tribunal to prosecute the crime of aggression must be created, while the rights of victims and the protection of witnesses, in particular victims of rape and sexual violence, must be a priority.

Renew Europe Group’s Vice-Chair, Dragoș Tudorache (USR, Romania), who co-negotiated the resolution on behalf of our group, welcomed the setting up of the Joint Investigation Team by Lithuania, Poland and Ukraine:

“We are horrified by the ongoing mass atrocities committed by Russia in Ukraine. The torturing and killing of civilians and the mass rape of women and children go beyond any war logic and amount to severe war crimes. As the EU is a pillar of democracy and support for human rights, we believe it should play a key role in fighting to bring justice to the victims and ensure that those responsible for these barbaric acts will be punished.”

MEP Katalin Cseh (Momentum, Hungary), co-negotiator of the resolution, Vice-President of Renew Europe Group and Coordinator in the Subcommittee on Human Rights, added:

"Thousands of war crimes have been committed by Russia since the country invaded in Ukraine four months ago. The indiscriminate bombing of civilian infrastructure, unlawful killings, and the mass deportation of Ukrainians to Russia inflict unthinkable damage to civilians in Ukraine and the perpetrators must be held accountable. This resolution will contribute to ensuring that justice is delivered to Ukrainians, who can then rebuild their country from seized Russian foreign reserves. Renew Europe will continue to support these efforts, standing firmly by the side of Ukraine."

Moreover, following an urgent legislative procedure, the European Parliament also approved the extension of the mandate of the European Agency for Judicial Cooperation (Eurojust) to permanently, immediately and appropriately store, preserve and share evidence of war crimes and cooperate with the International Criminal Court. In order for this mandate to come urgently into force and the crimes committed in the war in Ukraine to be prosecuted, we need to deal with legal instruments recognised in all Member States and Ukraine to ensure the ICC has full jurisdiction to bring war lords/criminals to justice.

“Russian war criminals will be summoned to Courts! This a strong step; we provide Eurojust with a new mandate to support the investigations of war crimes in Ukraine. The EU's agency for judicial cooperation will play a key role to coordinate the work of national prosecutors and the International Criminal Court and identify evidence of such crimes. Europe stands by the Ukrainians.”