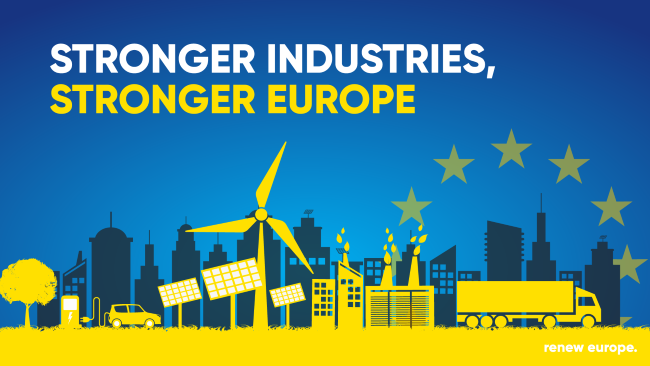 During today’s key debate on an EU strategy to boost industrial competitiveness, trade and quality jobs, the Renew Europe Group reiterated its call to strengthen EU’s capacity to act in order to become a real geopolitical player in a volatile world, especially in the wake of the last developments stemming from the Covid19 pandemic, the ongoing war in Ukraine, China’s protectionist policies and similar moves even from our closest allies, such as the U.S.

Our members made it clear that the potential of the Single Market, of which we are celebrating 30 years, is jeopardised by the lack of a real European roadmap to enable us to undertake the necessary investments and structural reforms to advance the EU’s open strategic autonomy. In this regard, we welcome the European Commission’s recent announcement of the Green Deal Industrial Plan and strongly believe that this is the way forward.

''We welcome the announcements by President von der Leyen. An ambitious action is certainly a massive relief for our industry and our workers. Here's Renew Europe's advice for the follow-up of the plan: make it fast, make it big, keep it green, make it simple.''

Renew Europe believes we need to tackle the industrial competitiveness of essential European sectors such as energy, raw materials, cybersecurity, and food security, thereby reducing our dependency on third countries, while fostering job creation, businesses opportunities and innovation, especially for SMEs (more of 95% of all businesses in the EU), a faster environmental and digital transition and increased geopolitical influence via a new era of economic and trade partnerships with democratic countries.

"Europe is facing a turning point. After years of growth and success based on free trade, we are seeing a global race for critical materials and technologies, based on massive subsidies. We need to find a united European solution that protects the Single Market while supporting critical sectors and European supply chains. Europe cannot afford a national subsidies race both outside and within Europe itself. Nor can the European answer be about money alone but must be about making businesses want to grow here."

A European Sovereignty Fund that avoids any potential fragmentation of the single market due to uncoordinated national schemes and strengthens a united European response, together with a reform of the EU own resources system, the improvement of the MFF and the use of the leftovers of existing programmes, will give the Union the necessary budgetary backbone to fight these economic disruptions and supply shortages, while securing our strategic open autonomy in the long term. We must also make it easier for companies and public authorities to innovate and invest in our continent using financial means from the new Fund.

“EU’s capacity to become more autonomous and less dependent on third countries lies mostly in its budgetary resources and its power to overcome the structural limits of the EU budget. We must allow the EU to release funds to strike specific dependencies, to be able to react faster and more decisively to crisis. This is how we are going to protect our economy, preserve jobs and support our industry.”