Dacian Cioloș: The European Union must once again demonstrate its added value to the citizens of Europe 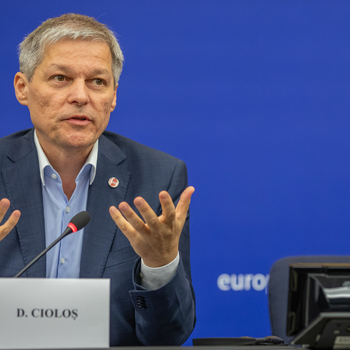 The President of the Renew Europe Group in the European Parliament, Dacian Cioloș, today delivered a lecture to students at the College of Europe in Bruges on the challenges facing the European Union and Renew Europe's plans to address them.

Speaking at the College of Bruges, President of the Renew Europe Group, Dacian Cioloș, said:

"For many students of my generation, who were between 18 and 25 years old when the Berlin Wall fell, for all those who were on the wrong side of the wall, we had a thirst for freedom, a desire to improve our daily lives and to take our destiny into our own hands. The first thing we wanted to do was to go out and open ourselves up to other European cultures, to experience Europe."

"The European project is without doubt the most beautiful project in the history of our continent. It has made it possible to turn the page on authoritarian powers and war."

"Today, however, the European project is no longer convincing only by its ability to bring freedom, democracy and peace. Peace is no longer enough to justify the need for Europe and populists are attacking its legitimacy, its essence and undermining the credibility of its policies."

"Brexit is to take place in a few days' time and we must learn its lessons. For me, Brexit is a mistake of history and shows why the European project must never be taken for granted."

"Europe will only exist if men and women want to keep this project alive. That is why my group, Renew Europe, has put the Conference on the Future of Europe on the European agenda. It is time to lay the foundations of why we are together, what we want to achieve together and how we work together. Renew Europe's ambition is to put all its weight behind renewing the European project, to give it new life."

"Europe today needs to demonstrate its added value. It must live up to expectations so that each of us can be actors in the major political, economic and social transformations of the world. "

"This is why we have chosen - and Renew Europe is perfectly in line with the European agenda that we have helped to build - 2 major working themes for the next 5 years: the digital agenda and the Green Deal. These respond to the two major changes we are facing. Both transitions and even revolutions."

"The Green Deal is about building a new relationship between prosperity, economic growth and the use of natural resources. Our economic system can no longer be based on a system where we produce, consume, throw away. "

"Europe must play a leading role in delivering these changes, in accompanying the transition. That is why we are calling for an ambitious transition fund that is genuinely financed. We cannot have major political objectives and at the same time be stuck with a minimal European budget. Europe needs to invest. "

"The digital transition will not be limited to accompanying the environmental transition. Robotisation, artificial intelligence, for example, will profoundly transform our daily lives - all with major impacts both economically and for our values and our functioning as an open and democratic society. We need a genuine European strategy on data if Europe is to remain in control of its destiny."

"We must show that Europe knows how to learn from the major crises we have just gone through, the financial crisis of 2008 and the migration crisis of 2015".

"Like the European project, the euro must not be taken for granted. We must now strengthen the international role of our single currency, finalise Economic and Monetary Union and develop real political leverage for governance."

"Since 2015, no progress has been made in our asylum and migration policy, even though we know that our tools do not work - if a new crisis were to loom, we would be in the same situation of lack of solidarity and coherence between our Member States as three years ago. This is a complicated subject that should not be ignored. This is why Renew Europe has taken the lead, from the very beginning of the mandate, to outline a global and coherent response."

“Reinventing Europe and developing new policies does not mean turning away from the “traditional policies”, but on the contrary to transform these policies to make them fit for our time. As you know, these policies are very important to me, but they need to evolve and integrate new challenges. It’s particularly true for the CAP which needs to look forward.

"To succeed in all these European and internal transformations, Europe must rethink its way of acting in the world. There is an urgent need to build an autonomous and credible European defence and security union that is complementary to our traditional agreements, particularly with the United States, especially within NATO. Europe must be able to speak with one voice and to act if necessary."

"Jacques Delors liked to say that Europe is like a bicycle. If you stop pedalling, it falls off. Let's pedal together and transform it!"