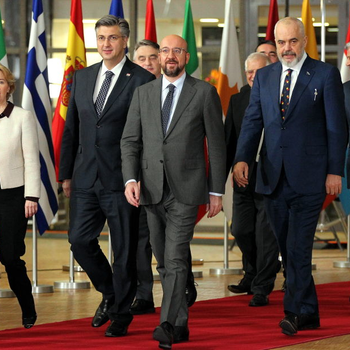 The Renew Europe Group in the European Parliament welcomes the Zagreb declaration agreed today during EU - Western Balkans summit by the heads of state and government from EU Member States and the leaders of the six Western Balkans partners. The summit, which was supposed to be held in Zagreb, took place by video conference shortly after the EU mobilised a financial package of over EUR 3.3 billion for the Western Balkans in order to support the region in tackling COVID-19 and sustain the post-pandemic recovery.

"The long-awaited summit is a clear confirmation that Western Balkan countries belong to the European family and that enlargement continues to be high on European Union’s agenda.

The meeting held today reconfirms the two-way commitment of the enlargement process: on one hand, the EU’s determination to further intensify its engagement at all levels to support the region’s political, economic and social transformation and on the other hand, the pledge of the Western Balkans to uphold European values and principles and to carry out the necessary reforms. The revised accession methodology will facilitate this two-way commitment and ensure concrete benefits faster for citizens of both sides.

The COVID-19 crisis brought to the strong need for solidarity and mutual support inside the European Union and with our neighbours and partners. Since the beginning of the crisis the EU ensured significant support for the Western Balkan countries and will continue to do so, proving to be the most helpful and reliable partner of the region.”

“I welcome the Western Balkans summit and its conclusions. The decision to provide over €3.3 billion of EU financial support for the Western Balkan countries to fight COVID-19 is crucial and will help the region to overcome the health crisis. Despite the difficult times, Europe has once again shown that it stands shoulder-to-shoulder with its Western Balkans partners and reaffirmed its unequivocal support for the European perspective of the region. After the European Council agreed in March to open accession negotiations with North Macedonia and Albania, we have to continue backing the Western Balkans with the reforms needed on their EU path because their future lies in European Union. Our political, economic and social engagement and the expression of solidarity are a driving force of integration and demonstrate that EU enlargement can be a success story.”