Venezuela: Time for the EU and Member States to act firmly as Maduro closes doors to diplomacy 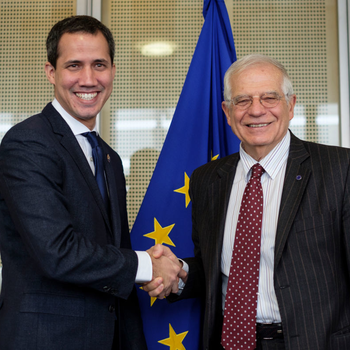 The Renew Europe Group in the European Parliament strongly condemns the expulsion of the EU ambassador to Caracas by Venezuela's President Nicolás Maduro and welcomes the reciprocal measure announced by HR/VP Josep Borrell to expel the Venezuelan ambassador to the EU. The European Union’s ambassador, Isabel Brilhante Pedrosa, has two days to pack her bags, following the European Council’s decision to add eleven leading officials to its list of Venezuelans subject to restrictive measures for undermining the democracy and the rule of law in the country. Our political group will ask the Conference of Presidents to add to the agenda of next week’s plenary session a vote on a resolution on Venezuela, following the International Donors Conference in solidarity with Venezuelan refugees and migrants.

“The expulsion of the EU Ambassador to Venezuela is a reaction to stronger sanctions. I have been calling for targeted sanctions against the Maduro regime since 2014 on behalf of the liberal group, and this is proof that these are working.

I welcome the High Representative's announcement to reciprocate the measures on the EU level and expel the Venezuelan Ambassador to the EU. I hope that all Member States with Ambassadors from the Maduro regime will follow suit.

We must stay firm and continue supporting the democratic forces in Venezuela.”

“The EU cannot be intimidated by this new provocation of Maduro and must redouble and extend sanctions against members of the regime, thus sending a clear message of firmness to the entire international community, and a powerful message to all Venezuelan citizens of the EU's commitment to democracy. Equally urgent is the immediate diplomatic response, commensurate with Maduro's decision, and to immediately withdraw the credentials of the anti-democratic representatives of Maduro’s illegitimate regime.

We call on the High Representative to reflect upon whether the time has come to take into account the decisions of the European institutions, which consider Juan Guaidó and the National Assembly as the only legitimate representatives of Venezuela, and to grant the persons designated by this institution the credentials for ambassador to the EU.”

“I find Maduro's comments on the EU presence in Venezuela regrettable, in addition to the expulsionof the EU ambassador to Caracas. Unfortunately, it isn’t the first time that his regime threatens our diplomats. The country won't find peace until Maduro listens to the people of Venezuela, until then the EU must continue to support the democratic forces in the country.”