"Chancellor Merkel, only hope will triumph over disillusionment" 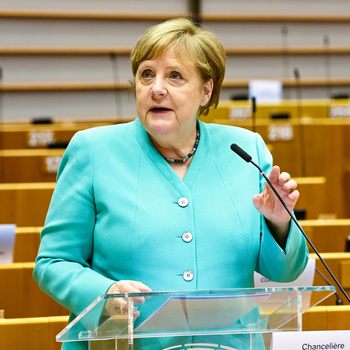 Renew Europe has called on the German Chancellor Angela Merkel to act boldly to deliver a decisive and inclusive economic recovery at the European Council Summit next week, but warned this must be underpinned by real investment that can deliver transformational change to support the fight against climate change and the digital transformation.

Renew Europe reminded that the German Presidency must not let Europe’s Rule of Law crisis become an after-thought. Proposals outlined by Renew Europe yesterday on smart conditionality and the rule of law take away hurdles for the European Council to adopt an ambitious Rule of Law Regulation for the EU budget, to ensure that citizens, cities and NGOs can benefit from EU solidarity directly, in case of rule of law backsliding and breaches of EU values and fundamental rights by EU Governments.

At a moment when disenchantment, disillusion and the decline of the European idea is on the rise, the EU must fight back and stand up to those who want to turn the course of our history. This was the strong message today issued by Dacian Ciolos, Renew President during the debate with Chancellor Merkel.

“While listening to your speech, I felt strong emotion. We have both known the other Europe, the one we refer to as “from the east” that was ravaged by decades of Communist dictatorship and by so many other totalitarian regimes.

And there are many of us here, from this often overlooked part of the continent. Today we all want the same thing: a strong, free and prosperous Europe. But for that we must fight against disenchantment, disillusion and the decline of the European idea. We must show ambition and relaunch a large number of European projects. Because only hope will triumph over disillusionment.”

The urgency must now be the adoption of the relaunch plan and the new multiannual financial framework. The latest economic forecasts from the Commission show us once again that we have no other choice. The future of Europeans is at stake. Giving in to divisions would be a historic mistake. So I have no doubt that you will stand side by side with the President of the Council, to forge a compromise next week.

But, I cannot hide my worry from you either. You recently said that you put money before the rule of law: allow me to disagree. We are not building Europe from a purely accounting perspective. We are building Europe around a solid project, vision and values.

Today, too many European leaders continue to torpedo this project and all that it represents. The perfect example is Viktor Orban, who is also a member of your political family. It is time, Chancellor, to stand up to those who want to turn the course of our history. It is time to make European funds conditional on respect for the rule of law. The political opportunity is there. Use this unprecedented 1,800 billion euro package as leverage.

“Put yourself on the side of Europeans, of all Europeans, so that they can live in a free, just and prosperous world. You have the power. Do not disappoint them!”

"Germany will be measured, among other things, by whether it can quickly kick-start the economic recovery, relying on innovation and small and medium-sized enterprises. We need to implement a Green Deal smart for a sustainable and future-proof EU in order to create incentives for the development of new, cost-saving technologies.

“On Brexit, there is a need not to slide into a no-deal scenario. The EU should also finally live up to its geopolitical aspirations, externally with a strong common voice for peace, disarmament, human rights and trade, internally by releasing the blockage in asylum and migration policies.“

"Even before the Coronavirus pandemic, the European spirit has been significantly weakened by the unresolved permanent conflict between the EU member states in asylum and migration policy. For Germany this means: the single-handed summer of 2015 must be followed by a European summer 2020! We need new proposals that can achieve a majority, suitable for halting and healing the progressive divisions on this issue."

"In order not to unleash further European centrifugal forces, the German Presidency should be an honest broker in order to ensure a clever compromise in economic policy. The recovery fund as a pure grant package could cause European political erosion to be at least as dangerous as the other extreme. Europe can only become a strong foreign policy player if it succeeds in restoring internal strength to the EU"