Poland: serious, sustained and systemic breach of the rule of law, MEPs say 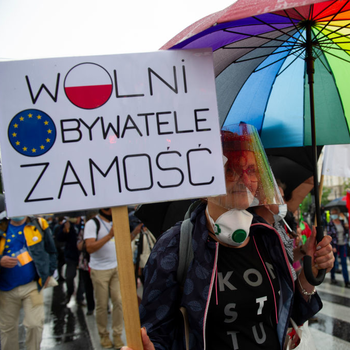 The Committee on Civil Liberties, Justice and Home Affairs is set to adopt a draft report tomorrow, urging the European Council to make progress in the ongoing Article 7 procedure against the Polish government. A majority of MEPs in the committee are convinced that facts and trends in recent years underpin the case of a clear risk of serious breach of values of the Union by the Republic of Poland. Since Law and Justice (PiS) came to power in 2015, the country has been under criticism for the functioning of its legislative and electoral system; for eroding the independence of its judiciary and the rights of judges, and for the manifold attacks against fundamental rights of its citizens; including the restriction of sexual and reproductive health rights and the public discrimination against vulnerable groups such as the LGBTI community. Renew Europe has persistently called on the Commission to make full use of the tools available to redress the Polish government for these infringements. Parliament's latest report makes reference to a binding, comprehensive Union mechanism on democracy, the rule of law and fundamental rights, as championed for years by Renew Europe, details of which have been presented by our Rapporteur in the LIBE committee earlier this week. If the draft report on Poland is approved in committee tomorrow as expected, it will be debated and voted in plenary in the autumn.

"The interim report provides a comprehensive and fact-based overview of developments in Poland since December 2017. The picture it paints is objectively grim. Since the initiation of the Article 7 procedure, the Law and Justice party doubled down on its intention to effectively destroy the separation of powers in Poland. It is therefore high time the European Commission requested the Court of Justice to impose penalty payments for ongoing non-compliance with rulings concerning the independence of Polish judges."

"A chain is as strong as the weakest link: if the rule of law is broken in Poland, it is broken in the EU as a whole. Parliament is - again - sending a strong political signal. The European Commission and member states can no longer ignore this rule of law crisis. Smart sanctions must be applied, touching the Polish government, not the Polish people. Last week’s elections have shown millions of Polish people want to remain at the heart of the European community of values. We stand with them."