Istanbul Convention: Renew Europe stands with the women of Poland 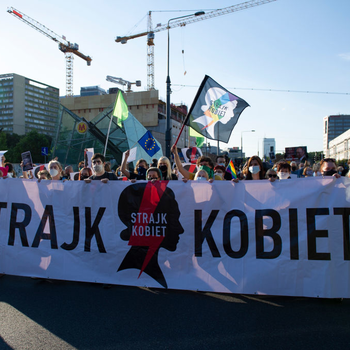 Responding to statements by the Polish Justice minister and media reports that the Polish Government is considering withdrawing Poland from the Istanbul Convention, the Renew Europe Group today condemns any such move and expresses its solidarity with the women of Poland. Poland is fully expected to commit to the Istanbul Convention. Withdrawing from this Convention would represent a further dangerous shift away from EU values and fundamental rights.

Renew Europe also calls on the Council to urgently conclude the EU ratification of the Istanbul Convention — the first international instrument to set legally binding standards to prevent gender-based violence — and urges the European Commission to move forward in the implementation of the EU action plan to tackle domestic violence, proposed by Renew Europe in the wake of an increase in violence against women during the COVID19 pandemic throughout Europe.

'An unambiguous clarification is needed on Poland's commitment not only to remain a Member of the Istanbul Convention but also to honour its obligations. Today, I expect the Polish Prime Minister to strongly remind his ministers that they would be better off spending their energy on combating the violence suffered by women, rather than making irresponsible statements that play with the lives of victims of domestic violence. Using the fight against the Istanbul Convention as an instrument to try to display conservative ' values ' is a pitiful & pathetic move that must be firmly sanctioned. The women of Poland deserve enhanced rights and better protection. »

‘The breakdown of the Polish rule of law has been going on for years. Poland’s intended withdrawal from the Istanbul Convention is unacceptable and clearly shows that we can never take women’s rights for granted.

The Covid-19 pandemic has shown how vulnerable women are to domestic violence. Withdrawing from the Istanbul Convention is an affront to all the women of Poland, especially those who have suffered during these challenging times.

Let us be clear: the rule of law and individual rights are not to be negotiated. If Poland decides to withdraw from the Istanbul convention, this increases the already urgent need to ensure that funding flowing from the Covid-19 recovery fund and MFF will be linked to the full respect of our common values through an effective conditionality mechanism.’

´The agenda of the Polish government is clear: restoring patriarchy, breaking down women's' rights day by day. Renew is squarely on the side of Polish women and we will not let go.

Europe is about equality and rights for all. Women must be protected against violence throughout the EU. It is unacceptable that member states do not sign up to the campaign against violence against women, using silly excuses.

The European Commission and the Council have to show their true colours now. Our appeal to President Michel and President von der Leyen is to make it crystal clear that we expect Poland, like all member states, to fully commit to the Istanbul Convention.’

Soraya Rodríguez Ramos MEP, initiator of the recent Renew Europe action plan to combat violence against women during the Covid-19 crisis and beyond, said:

‘Poland is going backwards, not forwards. The country signed the Istanbul Convention in 2015, but the government will withdraw from it, as “it contains elements of an ideological nature”, considered as “harmful”. For the polish government it is “harmful” to talk about gender, not to leave thousands of women unprotected from gender-based violence.’

‘Watching those thousands of women protesting in the streets of Warsaw is heart-breaking. The EU cannot only be alarmed by what is happening. We need to act, to join our voices to theirs, to stand for women’s rights, for human rights.’