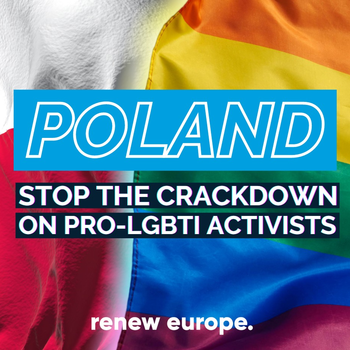 Responding to the arrest of at least 48 LGBTI activists and members of the anti-homophobia group ‘Stop Bzdurom’ yesterday, the Renew Europe Group in the European Parliament has today condemned the apparent heavy-handed targeting of LGBTI activists and calls on the Polish Government to release ‘Margot’, a prominent activist sentenced to two months detention.

Renew Europe recently welcomed the decision of the European Commission to reject the funding request of “LGBTI free” Polish towns for twinning projects and again calls on the European Commission and the European Council to make full use of the tools available to it in order to sanction the Polish Government for their wide- ranging and persistent infringements of the rule of law, fundamental rights and EU values.

Renew Europe calls on the President of the European Parliament, the European Council and Commission President von der Leyen to address this recent violent clampdown on LGBTI activists, which is further troubling evidence of increased political attacks by the PiS Government on the fundamental rights of EU citizens.

"It is sad and unacceptable that in 2020, Polish LGBTI people once again fear persecution. The targeting of Polish LGBTI activists is more reminiscent of protests by persecuted groups in Russia, than in a modern European democracy. Polish citizens are EU citizens and Renew Europe will be relentless in defending their fundamental rights. It is time for the European Commission and the European Council to act. "

"We have been arguing for years that the EU must take a comprehensive approach to democratic backsliding. The deplorable arrests of Polish LGBTI activists is a prime example of how human rights violations go hand in hand with destroying independent judicial oversight in the country."

"The Polish authorities have moved to the next level of their homophobic campaign. We are fast moving from hate speech to actually arresting and intimidating people. I fear the witch-hunt has started. This is not just the deliberate dismantling of the democratic rule of law, it is also an act of defiance towards the EU, which must be addressed.

There are persistent and ugly rumours that the support of Hungary and Poland on the next EU budget has been bought with the promise they will be off the hook in the Article 7 procedures; these need to be disproven by the Commission and Council. There should not be impunity for such gross violations of our values. "