EU citizenship must not be for sale 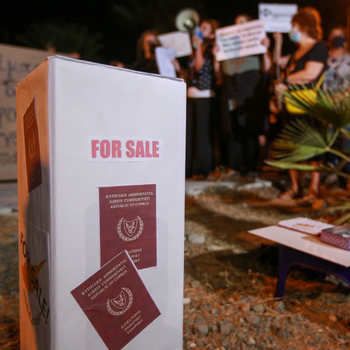 Renew Europe has long campaigned for a European approach to investor citizenship schemes, also referred to as "golden passports”. We do not believe it is acceptable for wealthy people, through large investments, to be able to buy their way to EU citizenship and skip immigration queues faced by everyone else. The golden visa system is not only shamefully unfair, according to investigations; it's also vulnerable to corruption and creates security threats.

Renew Europe therefore strongly welcomes the action taken by the European Commission today, with the launch of infringement procedures against Cyprus and Malta. However, we also call for the Commission to go further and outlaw the practice once and for all. Golden passports undermine European values and the essence of EU citizenship.

On Thursday, Members of the European Parliament will debate the severe security threats that have arisen through the sale of EU passports and visas to criminals.

MEP Sophie in 't Veld, coordinator in the Committee of Civil Liberties, reacted:

"Renew Europe welcomes the long awaited steps taken by the European Commission against Cyprus and Malta. It is welcome, but not enough. We are calling for an outright ban of the practice. Golden passports and golden visas are euphemistically called "investment schemes", but in reality it is a shady business bringing criminals and their money into the European Union. European governments are selling what should not be for sale: citizenship of the European Union. It is a threat to our security, and to the integrity of the EU.

The revelations in the “Cyprus Papers” also expose the weakness of oversight and enforcement. Once again it was courageous journalists who triggered the shutting down of the scheme, where national and European authorities dithered and refused to act.”

"The start of infringement procedures is a much needed step in the fight against corruption and money laundering. Willingly undermining our common EU security by handing out passports to those willing to pay is not only absurd but also a great risk. These abuses have to stop."