Poland: The European Council must defend the EU's legal order and address the PiS Government's rejection of the primacy of EU law at the 21-22 October summit 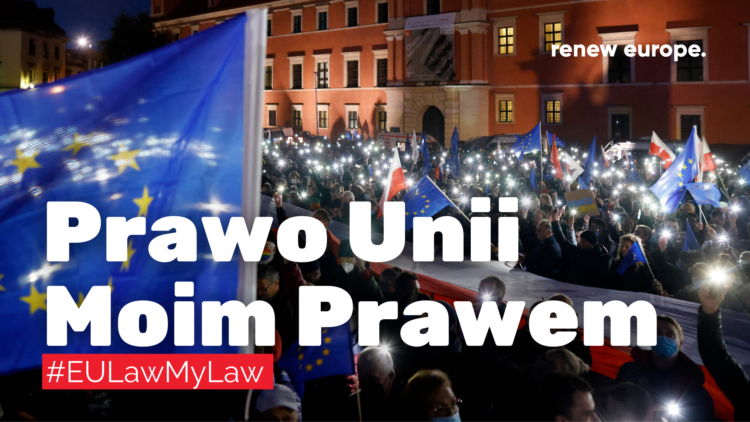 The illegitimate Polish Constitutional Tribunal's rejection of the primacy of EU law is an attack on the EU’s legal order and has thrown Polish EU membership into turmoil.

Renew Europe shares the desire of Polish citizens for a democratic Poland at the heart of the European project, and are worried that Polish citizens will no longer be guaranteed the adequate application of the freedoms and rights enshrined by their EU membership.

At the initiative of Renew Europe, the Polish Prime Minister Mateusz Morawiecki and European Commission President Ursula von der Leyen are today in the European Parliament to address the state of Rule of Law and Primacy of EU Law in Poland.

"The Polish authorities are not being honest with their citizens and they know it. Despite their denials, the truth is that their actions are a sly way to lead Polish citizens out of the Union. They should start being honest and explain to their start-ups they will lose development funds, tell their farmers they will miss out on subsidies, tell their students that they may not be able to add their name to the list of the two hundred thousand polish students who took part in Erasmus so far."

In a resolution, due to be adopted on Thursday, we demand that the Council issues a joint declaration addressing the seriousness of this matter by the European heads of state and government at their upcoming summit on 21-22 October. The current absence of a political response from the Council is unacceptable.

"Our group continues to demand immediate and bold action from the European Commission and the Council to defend the EU's legal order. We will not allow the Council to continue to ignore this problem and hope that it will disappear. Together with the Commission, it must make sure that the Polish government respects the accession treaty signed in April 2003 or face the legal consequences."

Renew Europe also reiterates that the Council must finally adopt detailed recommendations to address breaches on the rule of law with a clear timeline and go forward with the Article 7 procedure. Along with this, our group once again demand that the European Commission launches infringement procedures against the illegal Constitutional Tribunal's Court, triggers the Rule of Law Conditionality Regulation and rejects the approval of the Polish Recovery and Resilience Plan until the government applies with all the rulings of the European Court of Justice.