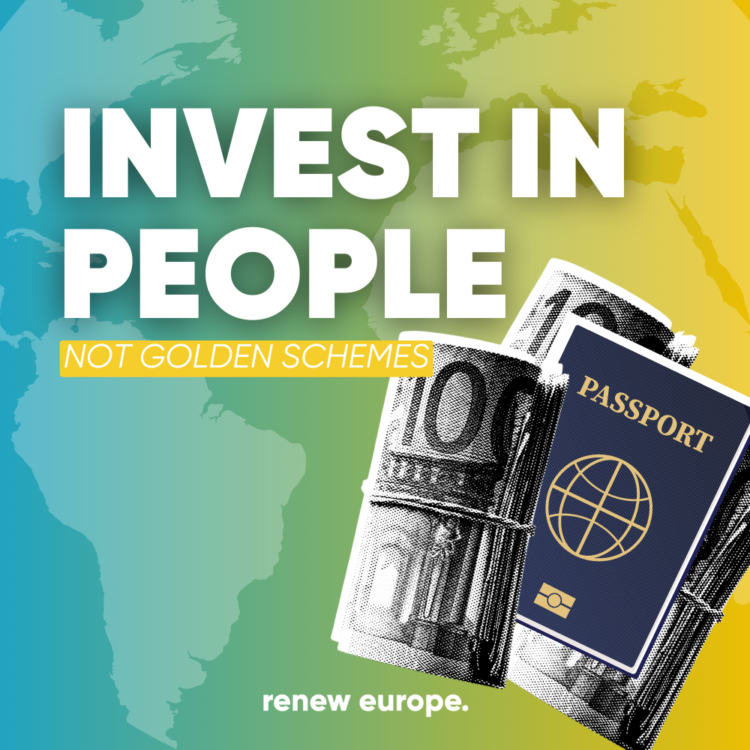 Renew Europe has for several years campaigned against the so-called 'golden passport' and 'golden visa' schemes that allow wealthy people to buy their way to EU residence and citizenship by an unfair and corrupt practice.

Finally, the efforts of our group's hard work are paying off. Tomorrow, the Civil Liberties, Justice and Home Affairs Committee (LIBE) is due to adopt MEP Sophie in 't Veld's legislative own-initiative report on the citizenship and residence by investment schemes.

This report, constituting the first-ever comprehensive package of legislative proposals, calls for the phasing out of the Golden Passport Scheme and to set up EU-level regulation on Golden Visas.

Sophie in 't Veld, Coordinator in the LIBE Committee and rapporteur for the report, says ahead of the vote:

"Golden passports and visa are above all golden opportunities for money laundering and for corrupt access to the Union. Member States are selling something that is not theirs to sell: access to the EU. Thereby, those Member States benefit financially, but at the expense of the security and integrity of the Union. It is also unfair to those that invest in the EU economy through regular channels or those that go through lengthy procedures to get a residence permit or nationality in a Member State. Now the Commission needs to follow through and come up with legislative proposals!"

The golden visa regulation shall include union-wide rules that generate more vigorous background checks on all applicants, reporting-back obligations by Member States, and enhanced information-sharing between authorities to counter tax avoidance.

Renew Europe also wants stricter regulation of the industry of intermediaries, for instance, by introducing a ban on the marketing of golden visas using EU signs. Other vital elements of the report are the proposal for an EU-level tax on the revenues Member States generate with the schemes and improvement of EU legislation on anti-money laundering to close any potential remaining loopholes.