EU Citizens have spoken, the EU and its Member States have the responsibility to listen and initiate a genuine reform of the treaties 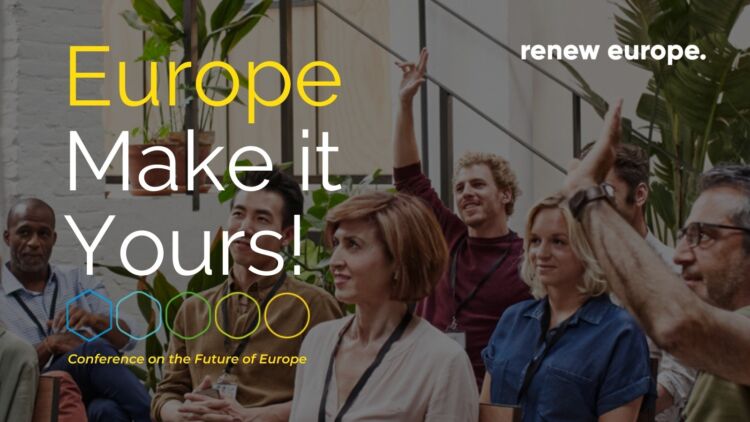 The Conference on the Future of Europe has been an unprecedented democratic exercise that has given EU citizens the opportunity to express their ideas about the European Union and its future. We are living in uncertain times, marked by several crises. The trust of citizens is therefore more essential than ever and we must listen to them.

Renew Europe welcomes the vote, today in plenary, of the resolution on the follow-up to the conclusions of the Conference on the Future of Europe. 326 proposals and 49 measures have been adopted by the Conference. These proposals cover a wide range of issues, such as climate change, health, migration, education, digital, economy, social justice, democracy and even external affairs. EU citizens call for a profound institutional reform, with the end of the rule of unanimity in several cases and the creation of transnational lists. We can be proud of this innovative exercise and Renew Europe strongly believes that we should repeat such an experience in the future.

Renew Europe calls on the EU institutions to respond to EU citizens with concrete actions. The EU and its Member states must be ambitious and courageous. A genuine reform of the treaties should be made to allow the EU to move forward.

Guy Verhofstadt (Belgium, Open VLD), co-chair of the Conference: “The Conference on the Future of Europe added a new perspective to EU politics, and brought citizens and elected politicians together around a series of measures to make the EU more effective, more tangible and more democratic. Now, we need to make sure we keep the momentum going. With today’s resolution, the European Parliament pushes to maintain the ambition in implementing the whole package, including the hardest parts where the Treaties need to be updated. We cannot let citizens down on this“.

Pascal Durand (France, Renaissance), Renew Europe coordinator of the committee on Constitutional Affairs (AFCO), added: “Our Parliament is moving towards political maturity. In the coming weeks we will propose a reform of the treaties. We finally have the courage to change the rules governing the functioning of our Union, which no longer correspond to the needs of the moment and the expectations of our citizens. And because we are responsible for the aspirations of Europeans, we will use all the strength of our democracy to put forward these proposals for profoundly changing Europe, against Member States that are too often timid, or even petrified”