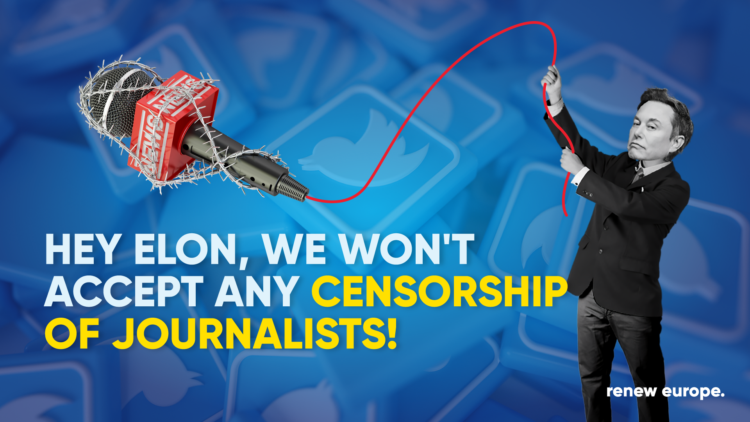 Responding to news emerging overnight that Elon Musk has suspended the accounts of several journalists from Twitter on questionable grounds, the Renew Europe group repeats its calls for the new owner of Twitter to appear in a parliamentary hearing with MEPs in the European Parliament on the reforms he is implementing and the EU's regulatory approach.

In a letter sent to European Parliament President Roberta Metsola last month, Renew Europe MEPs requested the President to invite Elon Musk, but no invitation has been sent to this date. Our political group is now requesting that this issue is added to the agenda of the Conference of Presidents of the European Parliament. EU legislation and values must be applied by Twitter.

"When Elon Musk took over Twitter, he proclaimed that he intended to run the platform devoted to free speech. The unjustified move to suspend the accounts of journalists reporting critically about him is the exact opposite of that. It constitutes a grave violation of journalists' right to scrutiny without fear of reprisal and threatens the freedom of the media and, ultimately, democracy as a whole. This type of censorship is of huge concern for the EU, as millions of Europeans are using the platform. Mr Musk must appear before the European Parliament to allow us lawmakers to hold him to account and get to the bottom of his actions and intentions.”

"EU laws and values must apply to Twitter. We trust in the European Commission to use the Digital Services Act fully to protect media freedom. Elon Musk should come and see us so he can understand the European rules of the game.”