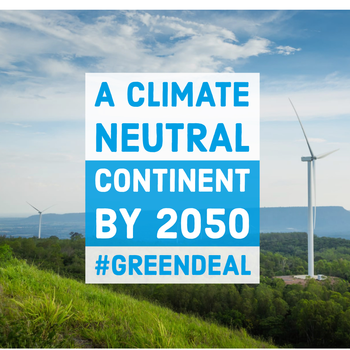 The European Parliament today adopted its position on the European Commission's Green Deal, taking on board the majority of Renew Europe's proposals. The resolution signed by the four biggest political groups, stresses that the Green Deal must be an overarching strategy for the EU and all actions should take the environmental challenges into account, aimed at limiting global warming to 1.5 °C.

Renew Europe expects the Commission to act swiftly and present a proposal for a binding and effective European Climate Law by March 2020 ensuring that all policy areas are aligned to the target of climate neutrality in the EU at the latest by 2050. It also instructs all Member States to adopt climate change adaptation action plans. As an important intermediary step, the Parliament wants the EU to reduce its domestic GHG emissions by 55% compared to 1990 levels by 2030 the latest. To achieve this objective, Renew Europe insists on the importance of supporting investments in clean technologies, giving incentives for markets for sustainable products, combined with a rapid phase-out of direct and indirect fossil fuel subsidies. Our group also fully supports the concept of a Just Transition whereby the climate and environmental transformation becomes a European success story.

Of crucial importance to Renew Europe was to call for a new industrial strategy – transitioning to a modern, climate-neutral, resource efficient and competitive industrial base in the EU by 2050. A further important element for our group was to push for an imminent EU Biodiversity Strategy with ambitious targets, complemented by action to tackle deforestation, an EU Forest Strategy, as well as making the EU a global leader in the protection of our seas and in global ocean governance.

"We are now entering a historical era, the green era. I am pleased to say that we have succeeded in getting the European Parliament behind higher ambitions for the environment, climate and a sustainable economy. Europe is well on its way to improve our work for a better climate and environment, much thanks to the work from us in Renew Europe.

CO2 Emissions must be reduced. Renew Europe wants to see concrete results on how we are going to achieve a climate neutral EU by 2050. There is a lot of work left to do during our mandate, but this is a good start.

"The Parliament welcomed the European Commission's proposal on the Green Deal by a large majority and I'm very pleased that at the heart of our action, lies a coherence between all EU policies with the Green Deal objectives.

Agriculture, trade policy, economic governance - all these issues must now be seen and analysed in the light of the Green Deal. On all these subjects, our group has made it possible to find the necessary majorities to implement the ambitions of the Green Deal."

"I am immensely proud of our group which has been a trailblazer in the European Parliament’s efforts in declaring a climate emergency and now formulating our position on a fair, sustainable, and successful Green Deal.

A just transition must be at the heart of the Green Deal Package, while we must ensure that new funds end up with the most affected communities and not hijacked by national Governments."