An ambitious Recovery Fund and MFF is the key for a prosperous, sustainable and strong Europe in the world 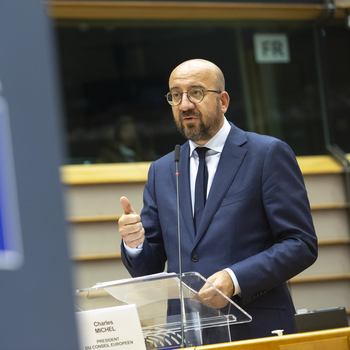 Today, Charles Michel has presented a new negotiation box that will frame next week’s discussions in the European Council regarding the adoption of a recovery program and the new Multi-annual financial framework.

Renew Europe welcomes the determination of Charles Michel to move forward in these difficult discussions. The President of the European Council has kept several priorities of the European Parliament and of the Renew Europe group while at the same time aiming at forging a deal between the Member States who should show ambition. Member States have the responsibility to be up to the "whatever it takes" statements. The future of the EU and its position in the world is at stake. Without a strong and ambitious Europe reflected in its financial means, all member states would be negatively affected.

Today’s proposal is a step forward in adopting an ambitious recovery program enabling the EU to get back on track. However, Renew Europe warns against an outcome of the negotiations which would not provide the MFF with sufficient means. Investment in the Single Market, defence, innovation, research and development is of crucial importance to champion the digital and ecological transformation of our economies and societies to create jobs for our citizens and opportunities for our businesses.

Renew Europe calls on the Commission and the Member States to not waste any time and move forward with new concrete own resources proposals, according to a clear and binding calendar for their introduction. The borrowing costs should not be borne by increased national contributions, and thus the citizens.

Renew Europe welcomes the willingness of the European Council President to include a rule of law conditionality reinforced by the role of the EPPO and of a new mechanism. These are essential priorities for Renew Europe as it will guarantee the efficiency of the funds allocated in all parts of Europe while at the same time ensuring that the European Union remains first and foremost a project of strong shared values. Our group will insist to negotiate the modalities of the mechanism under the procedure provided by its legal base.

“I would like to thank Charles Michel for his determination. These are difficult discussions in extraordinary times. We need to make sure the EU will have at its disposal the firepower to get back on its track, save jobs, transform our economy and pave the way for a better future for the younger generation. The next European Council will not only be moment of truth but also a huge responsibility for Heads of State and Government. Member States have high expectations, yet are quick to criticise the EU. Now they have an opportunity to give EU the means to be stronger and more efficient."

“We are not simply discussing figures. Behind these figures, we have the ambition for our Continent and the Europe we want for our youth. It is time for Member States to overcome their differences and show true ambition in order to make Europe more resilient, innovative and more sustainable. It's time to deliver a real digital and environmental transition. This is not just about money. This is about the future of all Europeans and our common democratic values”.

“This proposal for a compromise is a significant step forward made by President Michel, but it shall be improved. The plastics-waste contribution as of 1 January 2021 only is not enough. We must introduce at least two new own resources from the beginning of the next EU budget. We expect from the Member States, with the determined support from the Commission, to take clear and binding commitments to ensure that the ambition will be effective, and not an empty promise.”

“We appreciate President Michel’s efforts to move forward with the negotiations, but there remain three serious concerns for us: First, the lack of legitimacy of the mechanism for approval of the reform plans (involving only the Council). The proposal strips the Parliament and the Commission of the all the competences that they have under the article used as legal basis (175). In this sense, it amounts to a power grab. As the only institution representing the European citizens directly, only the European Parliament has the legitimacy to debate and approve these plans. Second, the proposal still fails to address convincingly how the debt issued will be paid. Parliament will not give its consent to a plan that does not create sufficient revenue from Own resources flowing directly to the EU´s budget. Third, we cannot agree with the use of rebates' as a negotiating element to satisfy the States most reluctant to accept the recovery package. The debate between net contributors and debt receivers must be thing of the past. “

ECON The future of Europe Leader Press releases and news