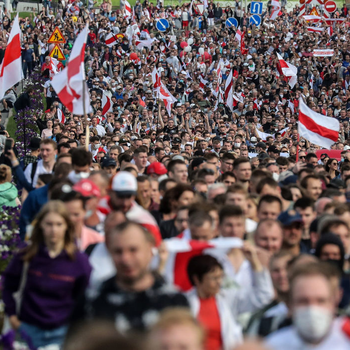 The Renew Europe Group in the European Parliament this evening designated its candidate for the Sakharov Prize for Freedom of Thought 2020, by supporting the democratic opposition in Belarus, represented - amoungst others - by Sviatlana Tsikhanouskaya, president-elect of Belarus, Siarhei Tsikhanousky, video blogger and political prisoner, Ales Bialiatski, founder of the Belarusian human rights organisation “Viasna”, Stepan Svetlov, founder of the Telegram channel NEXTA, Mikola Statkevich, political prisoner and presidential candidate in the 2010 elections, and Svetlana Alexievich, member of the National Coordination Council of Belarus and Nobel Laureate.

In recent weeks, the streets of Minsk have been filled with record-breaking daily demonstrations, against the 26 year-long criminal regime of Alexander Lukashenko and his cronies, who can only govern by brute force, in order to keep alive a clunky and regressive political system.

"By supporting the democratic opposition in Belarus for the Sakharov Prize 2020, we are supporting the Belarusian people in their fight for democracy."

"Sviatlana Tsikhanouskaya, Siarhei Tsikhanousky, Ales Bialiatski, Stepan Svetlov, Mikola Statkevich, Svetlana Alexievich, along with all the peaceful protestors that took the streets of Belarus over the last weeks, have the strength and courage to raise their voices against an authoritarian and brutal regime that understands nothing about the concept of freedom. They represent the spirit of the Sakharov prize."