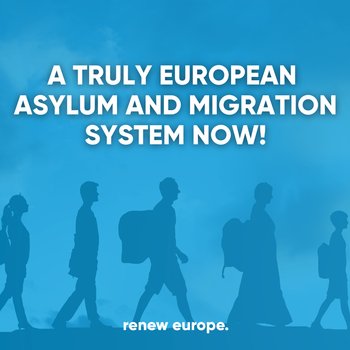 Today the European Commission presented its long-delayed plan for EU migration and asylum. It was not a moment too early. It has been clear for a long time that the European Union's approach to migration and asylum is not fit for purpose. For years, Europe has been stuck in an unsustainable situation where we condemn deaths at sea but uphold an asylum system that forces people to migrate irregularly. With the Commission's long-awaited proposal on the table, finally, a process can start to build up a sustainable migration and asylum system. The Commission, the Council and the European Parliament must now sit down together and cooperate to get in place a new system that can stand the test of time and Renew Europe will play a central role in shaping legislation and building a stronger system.

Renew Europe is pleased to see that the Commission presented proposals such as more efficient procedures and mutually beneficial and positive partnerships with third countries, which our group suggested already in our Renew Europe vision paper for Europe’s Migration and Asylum Policy earlier this year. Nevertheless, we are deeply disappointed by the lack of concrete proposals on legal migration. Renew Europe has for many years demanded a new comprehensive and ambitious migration and asylum system, built on our shared values of solidarity, human rights and respect for the rule of law, and we will keep on pushing for a system worthy of the name in the coming negotiations.

The President of Renew Europe, Dacian Cioloş (PLUS, Romania), commented:

”The European Union has been dragging its feet for too long, unable to bring solutions, when we all know that only common approaches will be up to the challenge. We need to build a truly European asylum and migration system that is based on EU values, solidarity and rule of law. The Commission package is a basis to build on and does contains a lot of the proposals Renew Europe called for in its position paper last January, which we welcome. As co-legislators, Renew Europe will work constructively with the Commission and the Council to deliver a real European approach to migration. It is time to get down to work - we ask the European Council to join us and now commit to make real progress.”

”Finally, the European Commission is making migration a priority. It is high time to break the impasse. Europe currently does not control migration. We can only remedy this by increasing the predictability of migration flows for through agreements with safe third countries, so as to dismantle the cynical business model of people smugglers, reinforcing the protection of our borders and setting in place a solid asylum system that gives clarity to both migrants as well as Member States. By increasing our control on migration, we can create a futureproof European migration policy.”

”The images of misery and devastation in Moria showed the moral bankruptcy of our system. The Commission must be commended for its efforts to end the deadlock in the Council. The proposals on the table are far from perfect. But failure is not an option. The Council is the hostage of a minority of countries that refuse to find a solution. Thus, the far right has captured EU migration policy. It is now to the European Parliament to improve the Migration Pact. We will work on a common European approach to Search and Rescue, based on solidarity. We will insist on legal avenues for labour migration, as no asylum policy can succeed without it. Quick processing of asylum requests is positive, but standards must not be lowered. We will not agree to a border procedure that leads to people being trapped in camps. No more Morias in Europe.”

”The long-awaited migration pact sheds much needed light on the way forward. We support the Commission's effort to find compromise that all Member States can support. We welcome the abolishment of the Dublin-system in favour of a new solidarity system and more efficient procedures that reduce the pressure for Member States at the external borders. That being said, we need make sure that every person is guaranteed a full and fair asylum procedure as well as dignified reception conditions at the border. The proposal is incomplete without a European vision for labour migration. As long as we don't create legal pathways to Europe, people will continue to embark on boats to cross the Mediterranean sea.”

MEP Fabienne Keller (Renaissance, France), member of the Parliament's Civil Liberties Committee and rapporteur of the revision of the Dublin regulation, reacted:

”The Commission comes forward with a coherent set of proposals to rethink the whole policy of migration and asylum. This is the right approach as all issues are interlinked. I also very much welcome the introduction of “solidarity” in the European asylum policy. This is the missing link in our current system. At Renew Europe, we will pay particular attention to building a well-calibrated and true solidarity mechanism between the Member States. From this “fresh start” promised by President von der Leyen, let’s work now for a good agreement!”