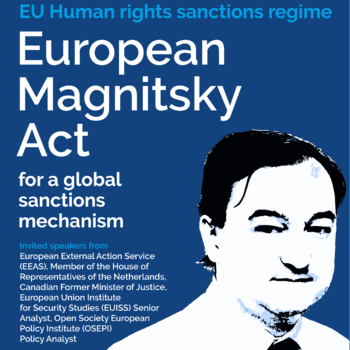 The Renew Europe Group in the European Parliament urges the European Council to include the adoption and implementation of a EU Human Rights sanctions regime on its top priorities. The European Parliament has repeatedly asked for a mechanism for sanctions to be introduced to punish individual culprits of human rights atrocities and our political group has been at the forefront of this fight. This mechanism should lay the groundwork for asset freezes and travel bans on those violating human rights.

The increasing number of such cases around the world needs a firm, fast and united response from the European Union and the only way to achieve this is through a so-called EU Magnitsky Act. Today, we have discussed the urgent need of such mechanism during a webinar organised by our group together with experts from other EU institutions.

“As parliamentarians, we have the responsibility to bring to this House the voices of people who suffer all kind of human rights abuses around the world. We need a European sanctions regime that will allow us to more effectively fight against impunity. This comprehensive framework should include human trafficking, sexual and gender based violence and corruption as major human rights abuses.”

"Europe cannot turn a blind eye to the many human rights violations taking place in the world. Alexei Navalny, Jamal Khashoggi or Ilham Tohti, to name just a few - they all deserve justice. Too often, we fail to respond to human rights abuses, to hold perpetrators accountable for their actions and to bring justice for the many victims of human rights violations. It is not enough to condemn human rights violations, as important as that might be. We need to take practical action and show that we stand by our words. It is now time for the EU to walk the talk, strengthen our foreign policy toolbox and finally adopt this European Magnitsky Act."

“Our Renew Europe group has been at the forefront of the fight for an EU-wide sanctions regime modelled on the United States' Magnitsky Act. The reason for our continued efforts is that we believe Magnitsky sanctions are efficient and just. Travel bans and asset freezes against autocrats and oligarchs are well-targeted, hit those who are responsible for abuses and hit them where it hurts. A new European sanctions regime has the potential to strengthen the EU's voice on the global stage and fight human rights abuses worldwide.”

The sanctions regime, under discussion, is inspired by the US Magnitsky Act, which was signed by President Barack Obama in December 2012, with the aim of targeting the Russian officials deemed responsible for the death of Russian tax lawyer Sergei Magnitsky. In its resolution of March 2019 on a European human rights violations sanctions regime, the EP backed the new sanctions regime, and urged the Council to reach agreement on it by the end of the parliamentary term in May 2019. The European foreign ministers agreed only in December to begin work on a Magnitsky Act for the entire bloc and since then there has been no progress.