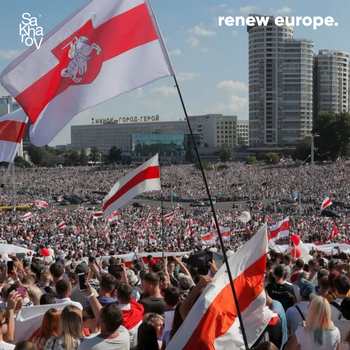 Today, the Conference of Presidents of the European Parliament decided to award the Sakharov Prize for Freedom of Thought 2020 to the democratic opposition in Belarus, represented - amongst others - by Sviatlana Tsikhanouskaya, president-elect of Belarus, Siarhei Tsikhanousky, video blogger and political prisoner, Ales Bialiatski, founder of the Belarusian human rights organisation “Viasna”, Stepan Svetlov, founder of the Telegram channel NEXTA, Mikola Statkevich, political prisoner and presidential candidate in the 2010 elections, and Svetlana Alexievich, member of the National Coordination Council of Belarus and Nobel Laureate.

The Renew Europe Group chose to support their candidacy by sending a message of solidarity with the Belarusian people in their fight for democracy against 26 year-long criminal regime of Aliaksandr Lukashenka.

“Today, by deciding to award the Sakharov Prize 2020 to the democratic opposition in Belarus, represented by the Coordination Council, an initiative of brave women and political and civil society figures, Renew Europe Group and the European Parliament stand united behind the Belarusian people’s strength and courage to fight for freedom and resist the last dictatorship of our continent. They must be at the heart of the EU’s actions to prepare a comprehensive review of its policy towards Belarus.”

“This award is above all, for the whole Belarusian civil society, and especially for the women who have bravely and peacefully filled the streets to stand up to Lukashenka's regime. Also for those who have said loud and clear that, despite everything, they are not afraid. The Sakharov Prize is not just a symbol, we need to strengthen our work and actions to protect and support human rights and civil society in Belarus in their legitimate path to freedom.”

“Civic activism and the brave resistance to a brutal regime by the Belarusian people reminds us that the fight for human rights and basic freedoms on the European continent is not over yet and requires our undivided attention and support.”

“The people of Belarus deserve to live in a free society without fear. The Sakharov prize sends a strong signal of our support and will hopefully encourage the democratic opposition and the civil society even more to stay fighting for their freedom.”