Peru: Renew Europe calls for a peaceful and constitutional solution to the current political crisis 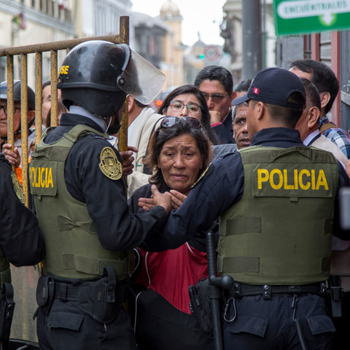 The Renew Europe Group in the European Parliament is extremely worried about the situation in Peru and calls on all political actors in the country to find a way out of the crisis. We condemn the disproportionate use of force by the police against protesters, who took the streets during what many view as the most serious democratic and human rights crisis since Alberto Fujimori was in power.

“The EU must show the strongest support for Peruvian democracy, its institutions and respect for the rule of law. Likewise, it must contribute to a peaceful and constitutional solution, which paves the way towards a consensus presidency supported by the national Congress and by the Peruvian society to lead the country until the presidential elections in April 2021. Renew Europe will push for an electoral observation mission for these elections, with the participation of Members of the European Parliament as a firm sign of our support for democracy in Peru, in these moments so relevant for the future of the country and the region.”

Renew Europe Group MEP, Izaskun Bilbao Barandica (PNV, Spain), Vice-Chair of the Delegation for relations with the countries of the Andean Community, added:

“In this situation it is a priority to call for calm and responsibility. The best way to promote this is to end the violence, to clarify the consequences of the repression on the demonstrators and the possible disappearances of people. In addition, the authorities have an obligation to provide stability in this transitional process. It is also imperative to express our solidarity with the victims. Calm, responsibility and dialogue must characterise the months remaining until next April when the citizens elect their new leaders in an open, transparent process with all the guarantees. Any other way will only generate pain and suffering.”