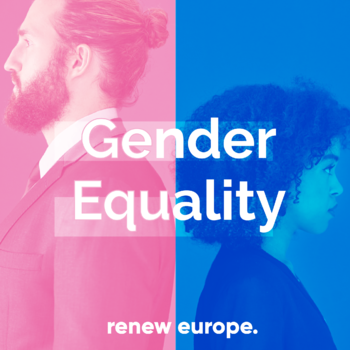 The Renew Europe Group in the European Parliament has today reiterated its demand for women's rights to be promoted across all policy areas and at the highest levels throughout the EU and warns that the COVID19 pandemic is increasing barriers to gender equality.

Firstly, in a report adopted by the European Parliament on the gender perspective in the Covid-19 crisis and post-crisis period, we stress the need to adopt a gender-sensitive approach in all aspects of the response to the pandemic. For instance, the closure of schools has increased the unequal distribution of unpaid domestic work for women and shows the necessity to access childcare services. To counter issues like this, the report pushes for the creation of a network to share best practice among member states on how to tackle the gender aspect of Covid-19 and calls on the Council to establish a dedicated configuration on gender equality.

Secondly, the report on the EU Strategy for Gender Equality marks a response to the new strategy for 2020-2025 and outlines some issues that need to be addressed. On the one hand, we call for concrete timelines, targets and monitoring of the commitments of the current strategy, and the other hand, we emphasise that we must go further to eradicate gender unequal structures and improve women's representation in decision making and public life.

Thirdly, the report on women's participation in the digital economy addresses gender inequalities in the digital sector. It presents a set of recommendations to the Commission and Member States to reduce the digital gender gap, such as assessing the factors behind the high rate of women dropping out of digital careers and introducing concrete measures to increase female participation in the industry. It also raises concerns about the increase in harassment and violence against women in the digital world and underlines the importance of cyber-hygiene and -safety.

MEP Samira Rafaela, coordinator of the Committee on Gender Equality and shadow on the report on gender perspective in the Covid-19 crisis, says about the report:

“This report comes at the right time, given the disproportionate impact of COVID-19 on women and the increase in domestic and gender-based violence during the crisis. This report recognizes that women and girls are affected most by violence during crises and calls for a gender-sensitive response. I am glad to see that gender equality is so high on the agenda of this months' plenary session. It proves that we, as Renew Europe, continue to see gender equality as a top priority.”

“The vote on this report reaffirms that women's rights and gender equality are a top priority for the EU. The Parliament keeps pressure on the European Commission and expects the Strategy to be followed by ambitious and legally binding proposals on preventing and combatting gender-based violence, eliminating the gender pay gap and improving women's representation in the political and economic spheres.”

MEP Karen Melchior, shadow on the report on women's participation in the digital economy, concludes about the digital gender gap:

“Ada Lovelace is the name of the first coder in history. She was a woman. She and countless women afterwards created the digital technologies we are using today. Today gender stereotypes and gender-based discrimination and even violence in digital sector hinder women’s access to digital services, as well as to education, employment and entrepreneurship in the digital economy and society. It is essential to tear down these barriers in order to maintain and encourage women in the EU's digital economy.”