Crackdown on Golden passports: Renew Europe calls for phasing out of toxic investment schemes by 2025 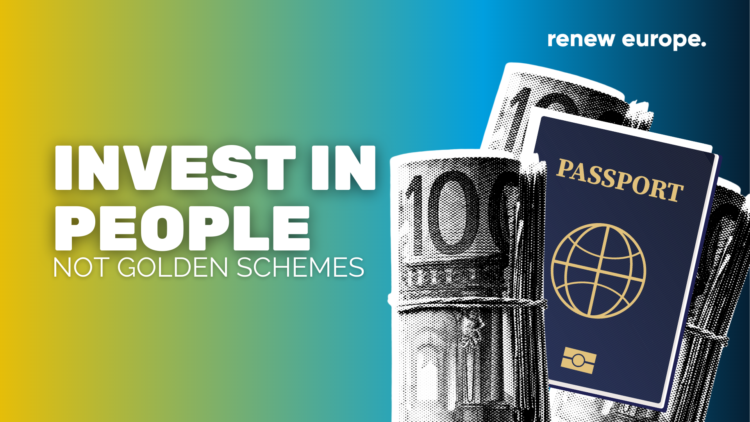 Today in the Civil Liberties, Justice and Home Affairs Committee (LIBE), MEP Sophie in 't Veld presented her legislative own-initiative report on citizenship and residence by investment schemes, also referred to as" golden passports" and" golden visas", operated by some Member States.

The schemes, allowing for wealthy people to buy their way to EU residence and citizenship, are not only unfair, but also vulnerable to corruption and create security threats. Time after time, reports have revealed that the schemes are linked to corruption, tax evasion, and money laundering risks.

Sophie in 't Veld, Coordinator in the LIBE Committee and rapporteur for the report, says: "There are no upsides to golden passport schemes. They attract shady business and present a back door to Europe for the wealthy. For the Member States it is an addiction to quick cash. But the cash comes at a price; diminished value of EU citizenship and eroded trust between countries. This toxic behaviour has to stop. All of Europe will be better off, when it does."

This first-ever comprehensive package of proposals calls for a full phasing out of all golden passport schemes by 2025 and for an EU-level regulation on the golden visa schemes. The new regulation must, amongst other things, involve detailed union-wide rules that creates stronger background checks, counters tax avoidance, and ensures legitimate investments in the EU economy. Strict regulation of the industry of intermediaries must also be part of the new practice, including robust anti-corruption measures and the obligation for intermediaries to obtain an EU-level license.

Further, the report proposes an EU-level tax on the revenues Member States generate with the schemes as well as the improvement of EU legislation on anti-money laundering to close any potential loopholes.

The work to finalise the report will now begin. Once adopted by the European Parliament, Renew Europe expects and will demand the European Commission to put concrete legislative proposals on the table by next year.