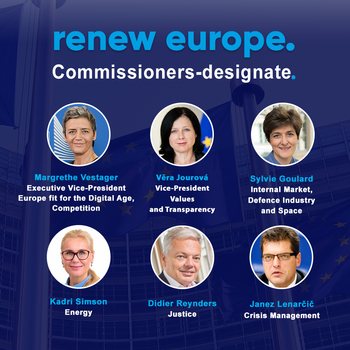 The European Commission's President-elect, Ursula von der Leyen, today announced her proposed new College of Commissioners, together with their respective portfolios, for the next term of the European Commission. Renew Europe welcomes the structure, which reflects the political priorities raised with Mrs Ursula von der Leyen before her appointment and we are committed to rigorously assessing the expertise of each Commissioner - designate in relation to their portfolios.

“It is great to see a more gender balanced European Commission, a key request of the Renew Europe family, with a structure also embracing the need for geographic balance, matching the founding priorities of Renew Europe.”

“We will carefully assess the expertise of the nominated Commissioners in relation to their portfolios. All nominees will have to fully represent and defend EU values, which are not negotiable.”

“I welcome the fact that the portfolios offered to our nominees reflect the high quality of our candidates and the political priorities of Renew Europe. European values are safe in the hands of our nominees and we are well placed to push for enhanced competitiveness and sustainability in Europe.”

“The nominees from the Renew Europe family are hungry to deliver a political reform agenda for citizens. Now we need to set up a common working agenda between the Parliament and the Commission, so we can deliver a strong and united Europe for our citizens.”

“Margrethe Vestager has been a driving force of the European Commission and she will be central in the one to come as Executive Vice President. She has the full backing of Renew Europe to continue breaking new ground in the Digital and Competition fields and challenging the status quo. ”

“The strengthening of rule of law mechanisms and the protection of fundamental rights inside the Union is critical and I have no doubt that Vĕra Jourová's is the right person for this job. Renew Europe looks forward to working closely with her.”

“Sylvie Goulard's vast experience means she knows more than anybody else how important it is for the European Commission and the European Parliament to work together and I am excited about collaborating with her closely on the development of a European industrial strategy, in sync with developments in the digital field.”

“Kadri Simson's experience as minister of economy and infrastructure will be important for the next European Commission. I know the Renew Europe Group is looking forward to working with her to build a strong Energy Union and a more sustainable Europe.”

“Didier Reynder's knowledge of judicial affairs will be a huge asset for the European Commission in his proposed role at this critical crossroads for our continent.”

“Janez Lenarčič has the full support of Renew Europe. He will be a strong addition to the Commission, as an experienced diplomat, who is familiar with crisis management. I am looking forward to work with him! ”