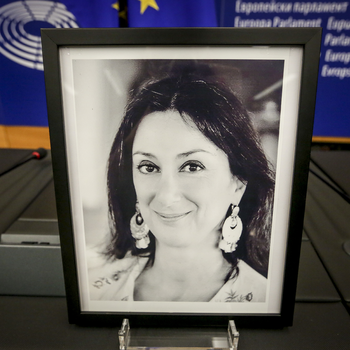 The European Parliament has today sent a delegation to Malta, on an urgent fact-finding mission over the fall out of the investigation into the murder of journalist Daphne Caruana Galizia, led by Renew Europe’s Sophie In ‘t Veld MEP.

The group of MEPs has requested meetings with the Prime Minister, the Opposition leader, the Police Commissioner, the Attorney General, Europol representatives as well as Ms Caruana Galizia's family and journalists. This mission will be followed by an urgent debate during the European Parliament plenary session in December.

“Sophie In ‘t Veld MEP from Renew Europe will lead an EP delegation to Malta, to observe the latest developments. The investigation into the assassination of Daphne Caruana Galizia needs to be free from domestic political interference, as is normal in any free democracy. We want justice for Daphne Caruana Galizia”

“Last month marked two years since the Maltese journalist Daphne Caruana Galizia was assassinated in a car bombing. Caruana Galizia’s investigative work exposed corruption at the highest level in the Maltese political and business circles and for that, she was murdered.

“I am closely following developments in Malta. Corruption has no place in a free democracy; no one is above the law. A free & impartial press is a pillar of democracy. The right of journalists to investigate, denounce, & hold authorities to account is a fundamental right!”

“Sadly, Daphne’s tragedy is not an isolated case. Press freedom & journalists themselves are increasingly under threat in Europe & globally. We must end this, we all need to stay united in the battle against corruption & make sure the rule of law is upheld.”