Gender equality at the heart of the European project: Renew Europe wants to build the ‘Simone Veil-Pact’ 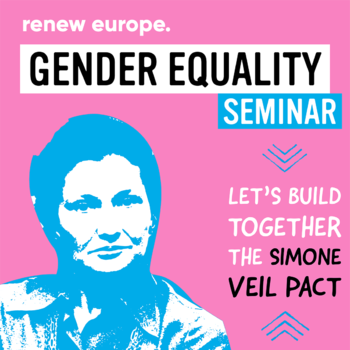 Gender equality at the heart of the European project: Renew Europe wants to build the ‘Simone Veil-Pact’

As an activist and women’s rights campaigner, ground breaking politician and committed European, Simone Veil’s work stands for respect for human dignity and human rights, freedom, democracy and equality. The Renew Europe Group aims to honour her legacy by building the ‘Simone Veil-Pact’ – a political commitment by Member States to adopt the most progressive national measures currently in force in the field of women’s rights and gender equality in the EU. It is against this backdrop that the MEPs Nathalie Loiseau, Sophie in't Veld and Irène Tolleret are hosting today a high-level political event to discuss and build upon the idea of the ‘Simone Veil-Pact’. This first kick-off event will be followed by a series of other debates, round-tables and seminars on this topic.

Nathalie Loiseau, Member of the Committee on Civil Liberties, commented prior to today’s event:

“Our ambition is to extend to all European women the best legislation, standards and practices in place throughout the European Union. On women's rights, there shouldn't be a multi-speed Europe but rather a Europe committed to efficiently and fully harmonising the most progressive laws of its member states from the top.”

“Women’s rights are top priority for Renew Europe. That is why we mark the start of the new parliamentary mandate with this topic – under the aegis of one of Europe’s greatest feminists and greatest Europeans, Simone Veil. Europe is the best place in the world for women, but there is still a lot of ground to be covered. Women’s rights are under attack from right-wing populists. Renew Europe will be a champion for women and girls across Europe!”

Irène Tolleret, Coordinator of the Committee on Women's Rights and Gender Equality, added:

“The principle of gender equality is enshrined in the Treaties. However, huge progress remains to be accomplished to finally achieve this goal. If we want to build a Union founded on the values of respect for human dignity, freedom, health and equality, we have to fight for women's rights. Because women's rights are human rights!”

You can follow today’s event ‘Gender equality: let's build together the Simon Veil-Pact’ (15-18:00h) via web stream. For more information and the full list of speakers, please click here. After the many revelations of some EU governments' abuse of spyware to surveil journalists,…
Read more