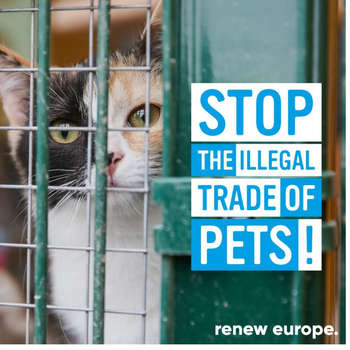 The EU must take urgent action to halt the growing illegal trade in under-age puppies, kittens and other companion animals across Europe, Renew Europe MEP Martin Hojsík has demanded.

A growing number of companion animals are illegally traded across Member States, often by organised crime networks, through the evasion of controls, document falsification and widespread misuse of EU rules.

MEPs today adopted a resolution co- tabled by Renew Europe, calls on the European Commission to draw up a cross-sectoral EU action plan to address the illegal trade in companion animals in the EU, including a uniform EU definition of large-scale commercial breeding facilities, known as puppy mills, to tackle the illegal trade in companion animals as well as enhanced cooperation between EU countries to fight the scourge of traffickers. It also calls for a harmonised, EU-wide system of mandatory identification and registration of cats and dogs amongst other measures.

“There is an urgent need for a European plan to combat the illegal trade in puppies, kittens and other companion animals. Pet trafficking is now believed to be the third most profitable type of illegal trade within the EU, after narcotics and weapons.

“The welfare implications for the animals involved are horrendous, but we also see increases in public health risks as these animals are often without the necessary vaccination, for example against rabies. Therefore, buying such an animal carries not only the financial cost of its possible treatment, but also the health risk to its owners.”

“We need to improve the lives of animals, especially dogs and cats, which are exposed to terrible conditions and are sold throughout Europe. Smugglers are only concerned with making a profit. One of the biggest problems is trade between countries, so states need to cooperate, exchange information and also increase transparency in the approach to this problem. I hope this resolution will be a wake-up call for action to end this cruelty.”

The resolutions adopted today can be viewed here: