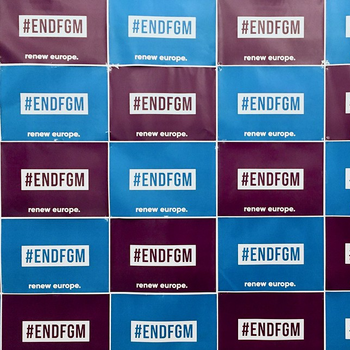 Renew Europe demands strong support today in Plenary for the European Parliament’s resolution on ending female genital mutilation, which is still a brutal reality for more than 200 million girls and women around the world, 600.000 of them living in Europe. The Parliament's text calls on the European Commission and Member States to strengthen relevant policy instruments to eradicate this cruel practice and asks the European Commission to include coherent targeted actions into the new EU Gender Equality Strategy, to provide sufficient funding as well as the provision of care for survivors. Crucially, prevention measures should be incorporated into all policy areas, especially in health, asylum and education.

Chrysoula Zacharopoulou, Renew Europe’s spokesperson on this file, said today ahead of the votes:

“Female genital mutilation is a barbaric act. It’s a sexist act. It’s an act against a woman’s body, it’s an act against her sexuality. No culture, no tradition, no belief can justify this violence. It is simply unacceptable that the far right in this house is trying to exploit a topic like this for their anti-migrant propaganda.”

“The European Union must strengthen its cooperation with third countries to finally put an end to female genital mutilation. We expect from the European Commission an ambitious forthcoming Gender Action Plan III, including comprehensive and measurable targets to eradicate FGM.”

Irène Tolleret, Coordinator of the Committee on Women's Rights and Gender Equality, added:

“Female Genital Mutilation is a form of violence that attacks the fundamental right to life, freedom, dignity, gender equality and physical and mental integrity. Nevertheless, it is still happening. The EU must react quickly and deliver even more concrete and stronger measures to tackle this scourge. Above all, we need more information campaigns, better prevention and more education.”

“If it continues at its current rate, 68 million girls will be at risk of FGM between 2015 and 2030. We cannot allow this to happen. We won’t turn a blind eye to this issue as long as it is still brutal reality for some girls and women.”

You can find the full text of the resolution here.